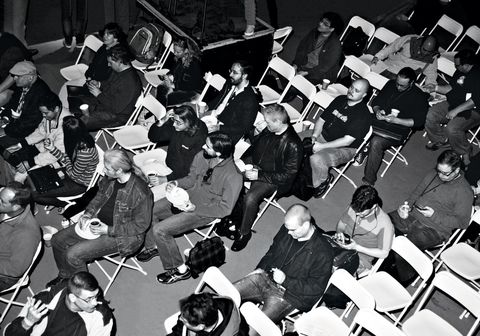 In November 2010, Noirin Shirley, 28, a technical writer for Google, was sexually assaulted at ApacheCon, a software conference held in Atlanta. Though she managed to break away, she later chronicled the event on her blog in a post titled "A Hell of a Time." "I tried to push him off and told him I wasn't interested … He responded by jamming his hand into my underwear and fumbling," she wrote. It was the third time that year that she'd been assaulted at a tech conference, according to her friend Valerie Aurora, a 35-year-old Bay Area computer programmer turned activist who has worked for several big-name tech companies, including Sun Microsystems and Red Hat. It wasn't even the worst indignity Shirley would suffer. "After she named the man on her blog," Aurora says, "thousands of people attacked her for 'naming and shaming.' They wrote she was fat and ugly and deserved to be raped."

Those events inspired Aurora to help launch The Ada Initiative—named after Ada Lovelace, an English mathematician widely recognized as the first computer programmer—a nonprofit devoted to promoting women in tech and rooting out sexism in the developer and hacker communities. Among the initiative's biggest victories has been persuading more than 100 industry conferences around the world—where instances of sexual harassment and assault against women are so rampant there are even websites devoted to cataloging them (Programmers Being Dicks, Geek Feminism Wiki)—to adopt formal sexual harassment policies.

But for her efforts, Aurora, like her friend, has been besieged by hackers and trolls. Earlier this year, she coaxed BSides, a cybersecurity conference in San Francisco, to drop from its lineup a provocative sex-ed lecture titled "Sex Drugs: Known Vulns and Exploits" (hackerspeak for sussing out a system's weaknesses and exploiting them), which included a discussion of date rape drugs. When word of the cancellation broke, Aurora's inbox and Twitter feed were flooded with death threats. "Any woman who sticks her hand up or is in the wrong place at the wrong time can get it," says Aurora. "And you can't tell a woman to just be strong when 10,000 people on Twitter are attacking her."

IT'S NO SECRET that Silicon Valley has a woman problem, but until now that conversation has largely referred to the marked shortage of female chief executives, entrepreneurs, venture capitalists, and programmers. What's typically missing from the debate are the mounting reports of open sexism in the industry—and against female programmers in particular—which often rears its head at developer conferences. Think Tailhook for techies. The past year alone has been rife with egregious examples: At a Dell conference in Copenhagen, Denmark, a speaker referred to women as "bitches" and asked the paltry few in the room, "What are you actually doing here?" (Dell later issued a formal apology for those remarks.) To promote a hackathon in Boston, organizers promised "friendly (female) event staff" to fetch the beer. Scantily clad go-go dancers at the International Game Developers Association's annual gathering prompted Brenda Romero, a prominent video game designer, to resign her post as cochair of the IGDA's Women in Games committee. Last year, things got so bad at Def Con, the legendary hacker gathering, that some women started handing out "Creeper Move" cards (inspired by rugby's red penalty cards) to guys who behaved inappropriately.

"We are hearing this type of stuff over and over at various professional gatherings and conferences," explains Alicia Gibb, president of the Open Source Hardware Association. "For females working in a mostly male environment, it's an often occurrence, not occasional."

Though the industry enjoys a reputation as a beacon for visionaries and powerful female titans like Yahoo Chief Executive Officer Marissa Mayer and Facebook Chief Operating Officer Sheryl Sandberg, the status of tech's rank-and-file female engineers is hardly inspiring. In 1985, women received 37 percent of the computer science degrees conferred in this country; 42 percent of the nation's software developers were women during roughly the same period. Today, women earn just 18 percent of computer science degrees and account for only 19 percent of the country's developers, according to the Bureau of Labor Statistics. Come payday, the picture is especially troubling: A recent study by the nonprofit Social Science Research Council found that the Valley's female workers earn only 49 cents to every man's dollar—much worse than the national average of 77 cents to the dollar, but also less than the roughly 60 cents to the dollar women earned in Silicon Valley back in the 1950s. "It's this idea, 'If women were smarter, they'd be writing better code,'" says Valerie Bubb Fenwick, a Bay Area–based software development manager for Oracle. "Women get levels of criticism men just don't."

Against this backdrop of growing inequity, the stereotypically introverted programmer—think of the Mark Zuckerberg portrayal in The Social Network—has evolved into a far more cocksure, frat-house kind of figure. These so-called brogrammers have reason to believe they can act with impunity: The demand for computer engineers is outpacing virtually every other industry in the nation, according to the U.S. Bureau of Labor Statistics. That has translated into six-figure salaries and over-the-top perks like concierges, car service, and free gourmet meals. Wall Street's masters of the universe have been supplanted by Silicon Valley's big-swinging code jocks. And thanks to the anonymity of the Internet, fueled by a dogmatic belief that all speech is free speech, they have made the very act of being a woman in the industry something of an occupational hazard.

Case in point: Last year, Bay Area video blogger Anita Sarkeesian, 29, launched a Kickstarter campaign to raise $6,000 to fund a series of YouTube videos about how women are portrayed in video games. That effort triggered a massive online hate campaign that saw her Wikipedia page vandalized—her photo was replaced with a pornographic image and her bio edited to describe her as having a "master's degree in whining"; among the many threatening e-mails she received, one included images of video game avatars raping her. "The perpetrators turned the entire Internet into a battlefield," Sarkeesian would later say in a TED talk about the affair. "They came after everything and anything that I possibly ever had online."

Sarkeesian's Kickstarter campaign ultimately generated nearly $160,000 in donations and inspired sympathetic write-ups on Slate and in The New York Times, signs that perhaps the ruthless trolling of outspoken women online has galvanized a backlash of its own. Already some of the industry's biggest players, among them Intel, Mozilla (developer of the Firefox browser), and the Linux Foundation, have lined up to underwrite Ada Initiative events. TheLi.st, a group founded by New York digital-media gurus Rachel Sklar and Glynnis MacNicol, pushes for more women on typically men-only tech panels. And outrageous examples of brutal trolling against women are fast becoming causes célèbres.

SUCH IS THE case of self-described tech evangelist Adria Richards, 35, driven underground after she tweeted a photo of two guys sitting behind her at a Silicon Valley conference in March whom she overheard cracking sexually charged Beavis and Butt-Head–type remarks. When that tweet later resulted in one of the guys getting fired, Anonymous, the vigilante group of "hacktivists," unleashed a ferocious retaliatory campaign against Richards and her company, SendGrid, a cloud-based e-mail delivery system with headquarters in Boulder, Colorado. (A YouTube video purportedly uploaded by members of Anonymous declared that Richards' actions "must be accounted for.") They disabled SendGrid's website for six hours, while Richards' personal information was allegedly published online. Before long, she was inundated with expletive-ladened racist tweets and e-mails, some threatening rape and worse. By week's end, SendGrid had fired Richards for what they said was her ill-advised handling of the matter.

But by then the whole affair had made international headlines and Richards—like Sandra Fluke, the Georgetown law student turned overnight icon after Rush Limbaugh eviscerated her on his radio show for her comments on free birth control—had become an emblem of a larger movement. Only it's in absentia. Since she was fired, Richards has stopped tweeting and blogging. In tech parlance, she's off the grid now, laid low by our digital era's version of a torch-and-pitchfork mob. "I know it's important to pick my battles. I know I don't have to be a hero in every situation," Richards reflected on her now-defunct blog, But You're a Girl, just before she was terminated. "Sometimes I just want to go to a conference and be a geek."