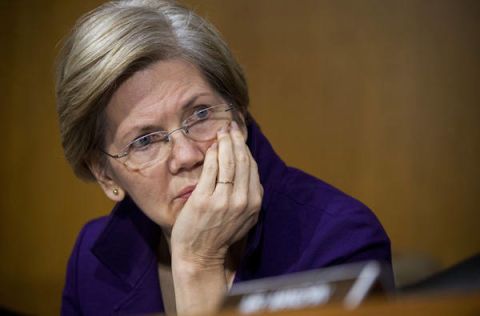 "I honestly can't believe that we're still arguing over equal pay in 2014."

That's how on the importance of fighting for equal pay, just weeks after Senate Republicans once again killed the Paycheck Fairness Act. With that one sentence, Warren hit the core frustration felt among women everywhere: "Seriously? It's 2014 and we still haven't gotten this worked out?"

You've heard the banner-line statistic multiple times before: women today earn only 77 cents to every dollar earned by a man, a gap that has closed dramatically but remains open. Earlier this month, Congress failed to pass the Paycheck Fairness Act, a bill that would close loopholes in the Equal Pay Act, a piece of legislation that's more than 50 years old. Senate Republicans argued that there are already sufficient laws in place that protect women against gender-based pay discrimination.

"If a woman believes she has been discriminated against in the workplace – which is both unjust and repulsive – she has every legal recourse in place to remain protected," Rep. Cathy McMorris Rodgers (R) wrote in an op-ed on the subject.

Warren argued that the bill is a "common-sense proposal," one that protects women from "discrimination [and] retaliation when they ask how much the guys are getting paid." She added, "Basic protection, basic information – that's essentially all this bill does." Many companies prohibit employees from asking colleagues questions about their salaries.

It's unsurprising, then, that the pay gap persists. According to Pew, 72 percent of women and 61 percent of men think that the "country needs to continue to make changes to give men and women equality in the workplace." But, the pay gap among young women is narrowing. "Today's young women are starting their working lives at nearly equal pay with men, but there's no guarantee that they will stay this close in the years to come," a recent Pew study found.

One way to keep the gap as close as possible over the years? Get comfortable petitioning for raises. NPR crowd sourced reader responses after asking for tactical advice on getting a raise, wondering about "the in-the-trenches daily experiences of women asking for higher salaries." The results, mostly from women in their 20s and 30s, hit a few thematic notes but one piece of advice seemed to trump all the rest: "Just ask."