In the event that you haven't already binged Lady Dynamite on Netflix, please do—because it's the medicine you need to cure your 2017-inflicted feelings of nausea and "y tho." The show handles every possible issue plaguing society (literally, there is not one thing it doesn't tackle) with a mix of wit and hilarity, and Season 2—which is currently streaming—takes on a topic that's on everyone's mind for good reason: sexism in Hollywood.

MarieClaire.com: Lady Dynamite is one of the most meta shows on television, and Season 2 deals with topics that are very, very relevant today.

Ana Gasteyer: "We filmed all the feminist and women behind-the-scenes episodes a year ago. The writers are incredibly conscious of meta information—they lead the charge on incredibly aware writing when it concerns gender, and they're incredibly funny about it. It's a uniquely hilarious female cast, we've all been around for a while, and we're able to make comments about what the industry is made up of. Some of that is changing, some of it won't. It's weird seeing the media, because our function is to reflect back on culture, so it's a strange relationship between what people want to have projected and what's being shoved down their throat. Lady Dynamite treads that line really nicely."

MC: I discovered the show pretty recently and it feels really good to watch it. Especially because part of my job is writing about the allegations about men in media—it's nice to watch a show that's run by women, stars women, and takes on these subjects in a way that gives them the weight they deserve while also being a hilarious respite.

AG: "I have this conversation a lot with my girlfriends from SNL—we talk all the time about what's happening in Hollywood and I can't speak for them, but what I can say is that comedians live in their own [language] a lot of the time. So their perceptions of all these things, while valid and universal, sometimes are also a little bit to the side and observant. Maria Bamford [who stars in Lady Dynamite] is a great example of that, because she's kind of in the margins. You're able to make your remarks off to the side without (hopefully) anybody yelling at you, and without having to be the mouthpiece for all women."

"To ask an entire half of the population to extract itself, analyze it, and have authority over it is sort of a tall order."

MC: Right, and now female actresses are tasked with being mouthpieces for this topic. As a reporter it's irresponsible not to ask questions about what's going on in Hollywood, of course, but it leads to women bearing the brunt of answering for these men. It's a hard line, but that said, Lady Dynamite is one of the few shows that's handling this topic in such a meta way.

AG: "Yes, and that's not the goal of the show—it's the byproduct. And that's sort of what you're saying too—the onus is not on women in general. We've all been living amidst it for so long, to ask an entire half of the population to extract itself, analyze it, and have authority over it is sort of a tall order. I think that we're all figuring it out together. When the #MeToo hashtag happened, as many people should have be asking of men, have did you ever seen this happen? Are you aware of it? Or, have you done things that you feel uncomfortable with?"

MC: One of the things I like about this season of Lady Dynamite in particular is that it's a direct mockery of the platform that it's on—specifically Netflix. I want to know if it's freeing to be on a show where you get to essentially make fun of Netflix while enjoying the benefits of being on Netflix.

AG: "It's fantastic. It's palpable. And I'm not even on the creative side of things. I'm coming in and I'm having a great day. Especially in Season One, with so many people coming from the old network model who were used to having a million suits there giving a million notes. This was like kids in a candy store. They're just writing what they want to write and having a great time, and they're aware of the assets and limitations of each form of media. It's very meta. And by the way, I like development executives, they're not all dumb—sometimes they have great things to say and great notes—the people I work with on People of Earth, for example. But there are different demands, so when you're working towards an advertising base, you're more aware of who you're audience is and you're more aware creatively of who you're writing for. Sometimes that's helpful, and sometimes it's a limitation. On Netflix it's fascinating, because you go to this place of 'How are they going to market it?' But they don't need to. There's an algorithm for people who like Ana Gasteyer, and Maria Bamford, and Mitch Hurwitz."

MC: Obviously I have to ask you about Mean Girls. What is your favorite memory from making that movie?

AG: "Like every former work place you tend to walk away and remember your own personal relationships. Anything you do with your SNL cohorts is always a little bit of a summer camp experience. We share a weird mutant bond. I remember flying up with Amy and Tina, and one nice late night where we stayed up late and talked. My daughter was so little, so I mostly have memories of that—mothering and working, and doing it with female colleagues that I still remain so close to."

AG: "I don't know what her relationship with the movie is—I feel like all teenager girls have seen Mean Girls, Clueless, and Heathers, they're such iconic coming-of-age teen movies. We went down to Washington to see the Mean Girls musical in development, and that was incredibly fun. It was great to watch my kids connect to that story so honestly—it's so timely, the conversation about women and the way we talk about one another. It's interesting how a piece of material can last and change, but also still stay relevant. Some stories don't hold up, but Mean Girls is uniquely relevant."

MC: Finally, you're in A Christmas Story Live, and I'm so pumped because it's my favorite holiday movie. But I imagine there's a certain amount of pressure when doing a live musical version of a holiday classic that people feel protective over.

AG: "It's the musical version of the movie, so I feel like that relieves a certain amount of pressure. People absolutely love the movie, but what's really nice about it in terms of adaptable material is that it's very heartwarming, and seasonal, and family-oriented, and rooted in nostalgia. In my humble opinion, the musical will be a seasonally appropriate throwback moment. Also the people who wrote the music did the music for Dear Evan Hanson and La La Land. They do that kind of nostalgia with a contemporary link really well. The thing I'm out of my mind with excitement about is that singing live is a first for me. They took the part of Schwartz's mom—in the movie she's an off-camera presence—and added a Hanukkah number for her.

Lady Dynamite is currently streaming on Netflix, and A Christmas Story Live airs December 17 at 7:00 p.m. ET on FOX. 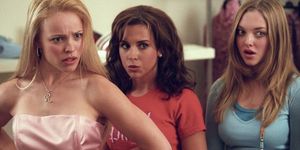 Someone Found a Deleted 'Mean Girls' Scene
Mehera Bonner Contributor Mehera Bonner is a news writer who focuses on celebrities and royals.
This content is created and maintained by a third party, and imported onto this page to help users provide their email addresses. You may be able to find more information about this and similar content at piano.io
Advertisement - Continue Reading Below
More From Celebrity
Beyoncé Stuns in a Mesh Dress With Matching Gloves
Lizzo and Chris Evans Had the Best IG Interaction
Advertisement - Continue Reading Below
Travis Shared PDA-Heavy Bday Tribute to Kourtney
How the Queen Ends Awkwardly-Long Handshakes
The Queen Has a Rule Against Bad Talking Family
The Queen Took a Pic of Philip With Her to Funeral
The Queen's Tolerance Was the Key to Her Marriage
J.Lo "Likes" Shady IG Post After A-Rod Split 👀
Beyoncé Shares Photos of Her White Power Suit
Will & Kate Welcomed Harry Back Into Their Group