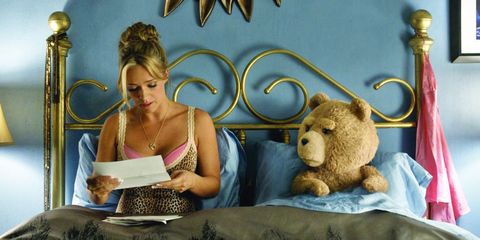 The expletive-spouting-yet-still-adorably-cuddly teddy bear Ted is back in theaters this week, and this time he's—surprisingly—married. In case you missed the first flick, the teddy bear with a startlingly profane POV ended the movie in love (or heavy lust, at least) with his coworker Tami-Lynn, played by up-and-comer Jessica Barth. Just in time to reprise her role for the sequel, Barth chatted with us about working with Seth MacFarlane (who voices Ted and wrote/directed the movie), what makes her laugh, and of course, what it's like to be married to a teddy bear.

MC
: What's your 10-second description of the movie?

Jessica Barth: "Everything seems totally perfect at first, after my character and Ted get married. The movie flashes forward a year and they're fighting a lot. They're ready for kids but he can't make a baby...since, you know, he doesn't have a human body and all. We try to adopt but the state doesn't recognize him as a person, so he has to fight in court to prove his personhood."

MC: So since he's CGI, what were you actually acting with?

JB: "In both the first and second movie, I would rehearse with a stuffed animal or another object as an eye line, so I could get used to his presence. When it came time to film, the filmmakers take away the stuffed animal and you're acting against nothing, not even a green screen. There is nothing to react to."

MC: How did Seth MacFarlane direct you?

JB: "I figure out my technique for each scene, and then that technique can't change just because the stuffed animal is taken away. I have to show love and affection toward the character, so I have to 'see' a teddy bear next to me. But Seth and I are friends and he really trusted me. The only thing he would change were the jokes, occasionally. He would keep throwing out new lines for me to try."

MC: Could you actually hear Seth's voice for the parts where Ted is speaking?

JB: "It depended on the location and scene, but Seth was usually standing right near us, looking into the monitor, saying his lines. I couldn't see him, but I could hear him. The closest he ever got to me was a driving scene, where he was hidden in the backseat saying the lines."

MC: How would you describe your sense of humor?

JB: "I have an extremely dry wit, and appreciate dry humor. But I laugh at everything. If you're doing stand-up comedy, you want me in your audience. There will be an excellent gag reel from this film, because we just couldn't keep it together."

MC: Do you have a Ted at home? They sell the stuffed animals, right?

JB: "I have two Teds in my house, one wearing the tux from our wedding scene!"

Kaitlin Menza Kaitlin Menza is a freelance features writer.
This content is created and maintained by a third party, and imported onto this page to help users provide their email addresses. You may be able to find more information about this and similar content at piano.io
Advertisement - Continue Reading Below
More From Celebrity
How Celebrities and Friends Are Supporting Meghan
Meghan Didn't Need Prince Harry to Be Wealthy
Advertisement - Continue Reading Below
Pregnant Emma Stone Runs Errands in Santa Monica
The Queen Reportedly Got Two New Corgi Puppies
Meghan in New Clip: Royal Family Is "Different"
Gwen Stefani Is Unrecognizable In New Insta Post
Lady Gaga Wore Serious Platform Heels in Rome
North West's Pet Lizard Has Its Own SKIMS
Is Harry & Meghan's Archewell Update a Royal Diss?
Why Is the Royal Family Called "The Firm?"