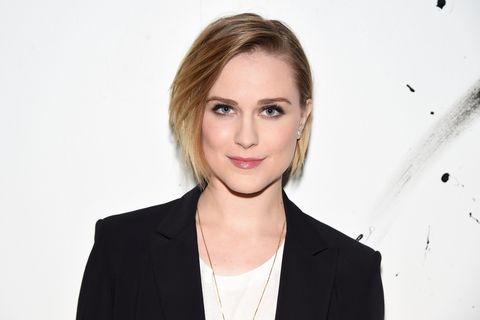 Evan Rachel Wood speaks with such certainty and depth that it's hard to move to the next interview question without wanting to know more and more about her and her life. And what a life she's had thus far—known for playing complex characters (and working since before entering double digits), the star was pushed into the spotlight thanks in part to her relationship with Marilyn Manson, which ended in 2010. Now 28, the actress and mom (to one son with Jamie Bell), has become a sort of anti-celebrity of sorts—she eschews the typical Hollywood lifestyle, instead focusing on projects that have power and intrigue.

And speaking of intrigue, Wood is also the face of Gucci Guilty Eau—the newest scent from the iconic brand. We caught up with Wood to talk about the super sexy campaign, making out with Chris Evans, and the buzzy HBO show Westworld—out this year.

Marie Claire: The new Gucci campaign is *pretty* steamy—and you star alongside Chris Evans. Was it at all awkward to film?

Evan Rachel Wood: Anytime you have to get intimate on camera, it's always a little interesting. You have to trick your brain almost, so that you don't get stage fright or get too much in your head where you're super uncomfortable. Chris and I are such great friends that we just kind of laugh our way through it. We ready ourselves by setting the tone—we blast some Motown, some Dirty Dancing soundtrack, some Marvin Gaye. "Let's Get It On" really helps. [laughs]

MC: In general, how do you prepare for love scenes? Is it always nerve-racking?

ERW: They're always weird. I just try to hang out with that person—if I can laugh, if we can have some sense of humor about it, that's great. But honestly, I also enjoy myself. You might as well have fun with it! [laughs] It's kind of like that moment in Step Brothers when you say, did we just? and then you high-five. It's part of the territory of acting, but it doesn't have to be like you're detached or anything. You're supposed to be a person in the act—so you, at some level, have to be in it.

MC: How would you describe the fragrance? Is it as steamy as the campaign?

ERW: I would say it's very classy. It's light, which you might not expect, and it's definitely not overpowering. It is a sexy scent, and it's for a woman that's confident, sensual, and powerful, somebody who lives in the moment I think—which the campaign kind of mirrors. I'd say it's for an independent woman with an edge—it kind of gives this idea that it's okay to sort of claim that and own yourself.

MC: Speaking of love and sex scenes, you're set to star in Westworld, which has stirred up a bit of controversy with what some say is aggressive nudity and sex scenes. What can you tell me about it?

ERW: Oh man! It's going to be so good. But it's funny, what I've been reading is not at all correct—believe me, there's a lot of nudity and sex scenes, but nothing more than what HBO is known for. And nothing is done just for shock or just to be gratuitous—the show is very well-written, and very confusing, and just awesome, and I think people are going to be really surprised at the layers and the use of nudity and why it's being used.

MC: You play Dolores Abernathy—what can you tell us about her?

ERW: What I can say is that the most complicated character I have ever played—she has many, many, many layers that even I'm not fully aware of. The cast is given the script just as we film, basically, so we're kind of developing these characters as the show is developing, which is a weird experience as an actor. Who you are as a character is kind of the foundation of everything, but this is just maddeningly brilliant. I mean, I'm on the show and the surprises are blowing me away. We can't alter our performances to fit where we think the story is going, and it's so different and brilliant.

MC: How would you describe it in one word?

ERW: Debauchery. Or, I guess, surprising? Honestly, I spend most of my days coming up with 500 theories about where the story is going and so far only two have been right. It blindsides me every time.

MC: What would you compare it to? Is it similar to HBO's Game of Thrones?

ERW: I don't think I've ever seen anything like it, to be honest. It's western, it's sci-fi, it's existential. It's cast so well and is so interesting and has these wild scenarios. It's taking what HBO is good at and bringing it to the next level. Everyone's putting all of themselves into this—it's going to be incredible. Every day I feel like we come out covered with bruises and wondering what's next.

MC: Is there anyone in particular you're excited to work with on this project?

ERW: Everyone is great, but getting to share a project with Anthony Hopkins is incredible. It's like watching Da Vinci paint or something—you're reminded why you do what you do.

MC: Is there anyone who you admire whom you'd love to work with?

ERW: I adore Susan Sarandon, she's just so cool, and brilliant, and beautiful. I just like her whole vibe—off- and on-screen.

MC: Switching gears but touching on this sensuality on screen, you've been very forthcoming about your own experiences and have done your part in raising awareness about bisexuality. Do you think we're in a space where more people—Hollywood stars included—are being more accepted? What's left to change?

ERW: I definitely think there is a shift happening right now in terms of visibility, but there's still a choice you make as a public figure on what to do or how to present your sexuality. People are still struggling with that, this idea of "coming out" or having a label or no label, and their level of privacy. I get that some people just want to do work and keep their lives private. I think for me, it just felt like I needed to be open about who I am. It just felt like the right thing for me to do. At first, the reason I was presenting this was selfish. It freed me. I didn't want to hide or pretend anymore, and it gave me a better idea of who I was when I could be open about that part of my life. It was also saying, 'It's okay, your career isn't going to be ruined.'

"I think there is a shift happening right now in terms of visibility, but there's still a choice you make as a public figure on what to do or how to present your sexuality."

And there are so many benefits to coming out—it felt great that none of it was in vain. It was helping others to come to terms with who they are, and that's a great thing. You know with bisexuality, there's so much out there in terms of what that means and there are so many definitions, and it's about finding out what's right for you. Some people hate the label. I'm personally fine with it, I think it fits me and my experiences, but maybe we'll get to a place one day where we won't need labels or to be "something." We won't need to define ourselves immediately to others. And I think we're getting there, but for now I've enjoyed reaching out to others and speaking out in order to make myself happy and others more comfortable to lead their own lives.

MC: What's coming down the pipeline for you?

ERW: Besides Westworld, I wrapped Into the Forest, which is a post-apocalyptic drama centering around two sisters, played by me and Ellen Page. And she is just wonderful. And I also wrapped Viena and the Fantomes, which is me playing a character who is mean to Dakota Fanning. Impossible, you would think, but here we are. Other than that, I'll just be writing and working on music and hopefully working on more Westworld. Everything's really good.

Samantha Leal Senior Web Editor I'm Sam, the senior editor at MarieClaire.com.
This content is created and maintained by a third party, and imported onto this page to help users provide their email addresses. You may be able to find more information about this and similar content at piano.io
Advertisement - Continue Reading Below
More From Celebrity
Your Guide to the Current Royal Line of Succession
Watch Prince Harry's Interview with James Corden
Advertisement - Continue Reading Below
Meghan Has an Adorable Nickname for Harry
Harry Revealed Archie's Impressive First Word
Harry Said the Press Was Ruining His Mental Health
Here's Blue Modeling Icy Park Like a Pro
How Kate and Will Feel About the Sussex Oprah Chat
Selena Gomez Photographed Flipping Off Paparazzi
Serena Williams Stuns in a Glamorous Red Robe
Sophie Turner and Joe Jonas Took the Cutest Selfie