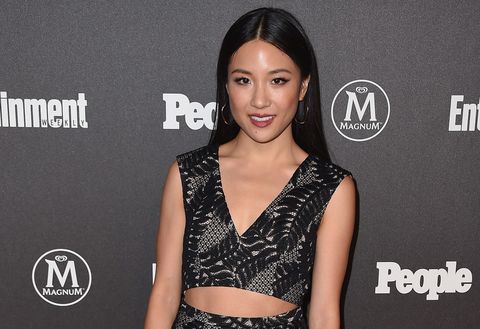 Hollywood's race problem received a lot of attention during this year's Oscar season, and while bringing light to the issue is a great step in the right direction, we're not there yet. Fresh Off The Boat star Constance Wu perfectly reminded us of that fact Friday when she tweeted a lengthy letter on the subject inspired by Matt Damon's upcoming film, The Great Wall. In the movie, Damon plays a warrior defending The Great Wall of China against monsters, and Wu sees the film as emblematic of the biggest issue.

"Can we all at least agree that hero-bias & "but it's really hard to finance" are no longer excuses for racism? TRY," she captioned the letter, which detailed the problem with Hollywood's unwillingness to cast people of color in leading roles.

While some people misinterpreted the tweet as a personal criticism against Damon, Wu reiterated in a follow-up tweet that she intended to raise awareness for the issue, not to point blame.

"Not blaming Damon, the studio, the Chinese financiers," she wrote. "It's not about blame, it's about AWARENESS."

Kayleigh Roberts Kayleigh Roberts is the weekend editor at Marie Claire, covering celebrity and entertainment news, from actual royals like Kate Middleton and Meghan Markle to Hollywood royalty, like Katie Holmes and Chrissy Teigen.
This content is created and maintained by a third party, and imported onto this page to help users provide their email addresses. You may be able to find more information about this and similar content at piano.io
Advertisement - Continue Reading Below
More From Celebrity
Are Will & Kate Sending a Message to Harry & Meg?
Harry and Meghan Reportedly Have a Four-Book Deal
Advertisement - Continue Reading Below
Naomi Osaka Lit the Olympic Cauldron in Tokyo
John Legend Performed "Imagine" for the Olympics
Simone Biles Is Honored With Her Own GOAT Emoji
Kate Winslet Reveals Her Favorite Red Carpet Look
Margot Robbie Had a Life-Size Cutout of John Cena
Jennifer Lopez and Ben Affleck Are IG Official
Celebs Share Their Emotional Infertility Stories
14 Candid, Unseen Photos of the Royal Family