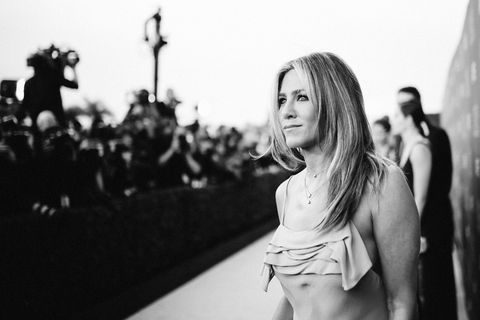 Jennifer Aniston is clearly at the top of her game. At 47, the actress has a great career, is an A+ businesswoman, takes important stands, and has been named the World's Most Beautiful Woman (NBD)—and she does it all while also being the poster child for #HealthyLiving.

The one thing you didn't know was getting in her way? Chronic dry eye. Here, the self-proclaimed former eye-drop addict is sharing the wealth of her newfound knowledge, plus tips for how to stay sane *while* you get healthy.

Marie Claire: You've partnered with Shire to help bring awareness to eye health—specifically Dry Eye Disease. Before you joined this campaign, what was your experience with Dry Eye? Did you realize how serious or common it is?

Jennifer Aniston: I thought it was just me, that my eyes were just sensitive or that I had allergies, and as the years went on and it got a bit worse I just thought, oh, it's my job—reading scrips it was starting to become painful. But then someone actually asked me in an interview, "Do you have anything you're addicted to?" and I said "Eye drops." That's when I was approached by Shire to do a campaign for eye health awareness. And that was such a change—I learned that I had been wrong all this time. It's a diagnosable condition, which was shocking to me, because I thought I knew a ton in wellness in general because I'm such a wellness freak—but I was so surprised and relieved to find out that it's a real condition and that you could remedy it.

"I think when I was younger, it was like—who cares? You don't realize the longterm effects. It takes its toll, which is I think why I'm better about it and take care of my body now more than ever."

MC: What's been your biggest takeaway from learning about this problem?

JA: I'm relieved, honestly. I had so many experiences throughout the day, and now, the irritation just isn't there. And it's weird because, you don't really notice how much eye irritation really gets in your way. Go to the eye doctor!

MC: You're known for your healthy lifestyle—how do you keep up with all the information and what you should be doing?

JA: I just read a lot, I love getting information from friends, and I have a lot of friends who are in the health industry, so that helps. On top of keeping up with what's new, I think just you know being mindful of what we're putting in our bodies, giving our bodies a break, that's very important. I think when I was younger, it was like—who cares? You don't realize the longterm effects. It takes its toll, which is I think why I'm better about it and take care of my body now more than ever.

MC: What are your top tips?

JA: You know, I think more and more young people are catching on when it comes to certain healthy behaviors, much more than I did when I was younger. But I would say sleep can always be emphasized—I didn't do it enough in my 20s, because you don't think you need it. But other than that, you know, people are using sunscreen, they're drinking water, they're doing the physical things in their lives early on—with cycle classes and running, etc. But I think it's also important to give yourself a break once in awhile. The idea is to be healthy, not to wear yourself down or to try and be a twig or change yourself drastically. The perspective has changed now more than ever to be supportive of that, I just hope it continues.

MC: What do you throw out all the rules for when it comes to food—what are the foods that you think "ah, I'll make up for this later"?

JA: Depends on the day, but definitely my cheat snacks are pizza or Mexican food. That's been my forever love affair—Mexican food. But yeah it has to be something savory or cheesy. I'm not tempted by sweets.

MC: What does your usual day look like, food-wise?

JA: Breakfast is usually a shake, because I didn't like eating in the morning. But I know it's a healthy thing, so I try to get something in my body. For lunch and dinner, honestly it's pretty much the same thing—maybe some sort of fish or protein, a fruit salad, pasta once in awhile. A big salad. And I drink a lot of water. Like, a lot. But yeah, I keep it pretty basic.

JA: I absolutely love The Class. It's in New York with Taryn Toomey. It's one of the greatest workouts—a 75-minute workout, kind of like yoga mixed with bootcamp. It's my newest love. But I love yoga in general. It's so important for me to incorporate it into my routine, it's important for my sanity!

MC: What would you say to others looking to be healthier or do better?

JA: I would say, first, go to the website—it's another thing to go over your doctor with your list when you go for your yearly checkup. And also just be mindful of what you're doing. Eating and exercising should be conscious decisions. That being said, it's okay to treat yourself once in awhile. I'm not going to stop eating Mexican food!