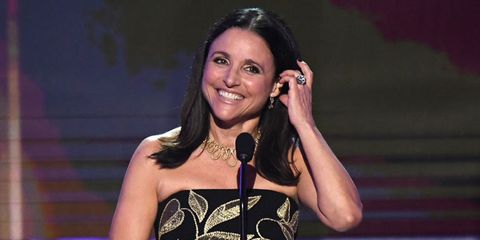 "I want you all to know that I am the daughter of an immigrant," Louis-Dreyfus said, as she accepted her SAG Award for Best Actress in a Comedy for Veep. "My father fled religious persecution in Nazi-occupied France, and I am an American patriot, and I love this country, and because I love this country I am horrified by its blemishes. This immigrant ban is a blemish, and it is un-American."

William Louis-Dreyfus, who passed away last year at the age of 84, moved to the USA with his mother in 1940.

Louis-Dreyfus went on to read a statement from the Guild which emphasized the importance of storytelling by creators from diverse backgrounds and nationalities. "We are grateful for them, we stand with them, and we will fight for them," the statement concluded.

Emma Dibdin Contributor Emma Dibdin writes about television, movies, and podcasts, with coverage including opinion essays, news posts, episodic reviews and in-depth interviews with creatives.
This content is created and maintained by a third party, and imported onto this page to help users provide their email addresses. You may be able to find more information about this and similar content at piano.io
Advertisement - Continue Reading Below
More From Celebrity
Iconic Party Photos From the Past
The Best TV and Movie Wedding Dresses of All Time
Advertisement - Continue Reading Below
40 Celebrity Sisters Who Look So Much Alike
40 Rare Photos of Grace Kelly Through the Years
A Look at Royal Family Portraits Through the Years
The 50 Most Popular Episodes of ‘Friends,’ Ranked