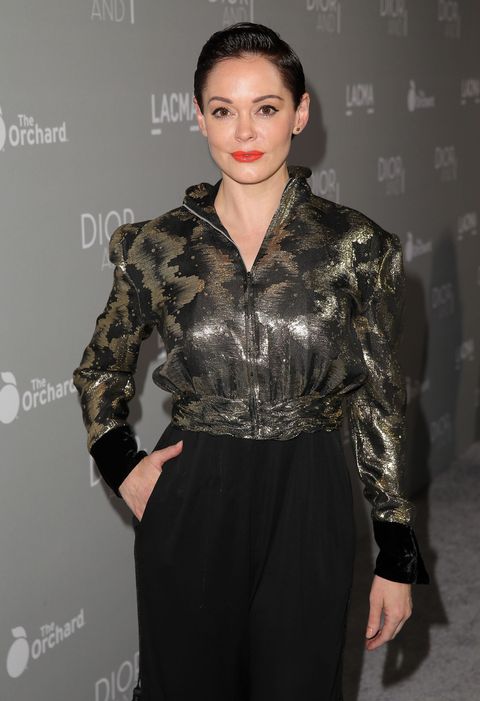 Update, 6/26: Rose McGowan has clarified that she was not fired by her agent Sheila Wenzel. (Digital Spy names Steve Muller as another one of her representatives.)

Sheila Wenzel is a wonderful agent that ceased working with Innovative before my firing. She's a good, strong woman I'm proud to know.

The awesome thing about being an artist? You can't be fired from your own mind. #FREEDOM

On another note, Jessica Chastain is on board, so that is cool too.

🙏🏼 RT @jes_chastain: As do I. Her treatment confirms the misogyny underpinning the industry. ... http://t.co/i6VA53idkR

Original post, 6/25: Rose McGowan recently stirred up some controversy when she tweeted out a particularly interesting (but sadly probably not atypical) casting call she had gotten. The casting note, which has since been retweeted over 2,000 times, stated that actresses going out for the role would need to wear a dark, form-fitting shirt that "shows off cleavage. (Push-up bras encouraged)."

McGowan captioned the pic: "Casting note that came w/script I got today. For real. Name of male star rhymes with Madam Panhandler hahahaha I die."

The actress later stood by her words, though she said she did not hope to "vilify" Adam Sandler, but rather raise awareness about sexism in Hollywood. "I was offended by the stupidity more than anything," she told Entertainment Weekly. "I was offended by the fact that that went through so many people's hands and nobody red flagged it. This is normal to so many people. It was probably even a girl that had to type it up. It's institutionally okay."

Later, McGowan tweeted that she had been let go from her agency because she spoke out.

I just got fired by my wussy acting agent because I spoke up about the bullshit in Hollywood. Hahaha. #douchebags #awesome #BRINGIT

To which we can only say: