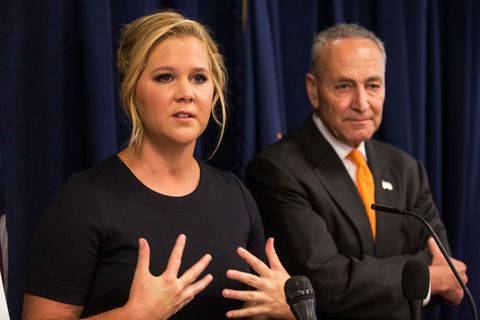 Amy Schumer hasn't forgotten. After a gunman opened fire this past July during a screening of Trainwreck, claiming three lives (including his own) and injuring others, Schumer teamed up with her cousin, Senator Chuck Schumer, to propose new gun legislation. By powering forward on policy, she's hoping to prevent this kind of tragedy from happening again—and also to process her own emotional devastation, which continues to linger.

"On Thursday, July 23rd, a man sat down for my movie, Trainwreck. I don't know why he picked my movie," she said on Sunday, according to The Times Picayune. "It is something I live with every day."

The star announced her partnership with Senator Schumer in August, and now the two have revealed their finalized plan—they're urging lawmakers to support a new bill (sponsored by both Schumer and Schumer) that would close a loophole which allows guns to be sold without background checks at gun shows and online. They've started spreading word about the campaign using the hashtag #AimingForChange, hoping to start a dialogue about gun control.

Samantha Leal Senior Web Editor I'm Sam, the senior editor at MarieClaire.com.
This content is created and maintained by a third party, and imported onto this page to help users provide their email addresses. You may be able to find more information about this and similar content at piano.io
Advertisement - Continue Reading Below
More From Celebrity
Prince William Mentioned Harry By Name, Finally
Republicans Want Meghan Markle Stripped of Title
Advertisement - Continue Reading Below
Princess Diana Would Be "Horrified" By Portrayals
The Cambridges Head Out on Vacation
Spice Girls Reunion Tour Might Feature Posh Spice
Prince Charles' Revealing Joke About the Throne
Some People Think Prince Harry Sounds American Now
Prince Charles May Make Buckingham Palace a Museum
Chrissy's Daughter Luna Is Learning to Read
The Queen Spent a Night in Hospital