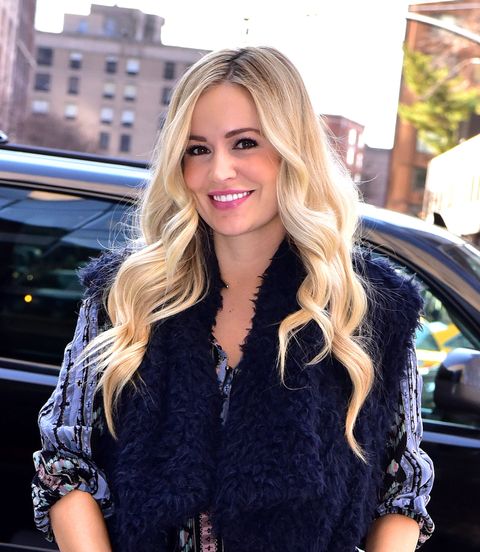 It's been four years since Emily Maynard starred on ABC's The Bachelorette, but her pregnancy announcement was already trending by the time we met up to chat about her memoir, I Said Yes. Emily is hardly the first Bachelor Nation alumna to write a tell-all, but her story is slightly unique among the brave souls who attempt to find love on live television. Her fiancé, Nascar racer Ricky Hendrick, died in a plane accident shortly before Emily found out she was pregnant. Six years later, she joined The Bachelor and then The Bachelorette, only to have two broken engagements splashed across the glossy pages of Us Weekly and People. But since Emily's tenure on TV, the reality-consuming world has changed. Feminism is no longer taboo, Twitter lurks around every corner, and thanks to Tinder, who isn't dating 24 randoms at once? So, how does The Bachelor remain relevant in a world where sexism is something everyone from Taylor Swift to Beyonce is side-eyeing? File that under things I talked to Emily Maynard about.

[pullquote align='C']"There's just this sense of making this guy this idol. Even if you wouldn't like him in real life, you do on the show because you have to."
[/pullquote]

First up, Emily is very traditional, and that's just fine. She's "been excited to get married and have babies" ever since she was a child, and while this particular set of a ambitions might seem old fashioned, it certainly doesn't define her. Take the moment Emily assured me that she wasn't "current enough" to discuss feminism and then delivered this solid analysis of The Bachelor's archaic gender politics:

"This guy likes you, and he gives you a rose. If he doesn't, you don't get a rose, and then you're crying in a limo and the whole world's going to see it. It's just giving the guy all the power, and that seems very sad. There's just this sense of making this guy this idol. Even if you wouldn't like him in real life, you do on the show because you have to."

Since Emily's time on reality TV, feminism has experienced a surge in mainstream popularity with stars like Lena Dunham, Beyonce, Jennifer Lawrence and Rowan Blanchard driving the conversation. Given the climate of 2016, The Bachelor's fairytale seems out of touch, which became apparent during Kaitlyn Bristowe's season.

Kaitlyn opted to have sex pre-Fantasy Suites, breaking an unspoken Bachelor rule in the process. The slut-shaming that followed was so extreme that host Chris Harrison addressed it on air, reading actual tweets Kaitlyn had been subjected to ("You're a little #whore so shut your little whore mouth #slut") and admonishing the people who sent them. Sadly, many of these people were women, who presumably expected Kaitlyn to be more like Emily.

[pullquote align='C']"Women are just harder on other women, you know? I think that's natural and I hate that."
[/pullquote]

"My heart really broke for her afterwards," she told me. "Everybody's always saying 'be real, be who you are, they're gonna rip you apart if you're fake.' She was herself through and through and she got ripped apart more than anybody. I think, too, if that was somebody else, maybe they would have edited around that. Maybe they would have not shown that. They pick and choose what they show."

On paper, Emily is Bachelor gold—sweet, Southern, family-oriented, and easily likable. But despite these qualities, Emily was dragged through the mud when her engagement to Bachelorette winner Jef Holm didn't work out. The audience who cheered so hard for their relationship blamed her for its unraveling, while Jef was cast as the quirky hipster who could do no wrong.

"Women are just harder on other women, you know?" she told me. "I think that's natural and I hate that. I wish that we would support each other and give each other the benefit of the doubt. I definitely think they're harder on the girls than the guys."

Perhaps one of the reasons audiences have such unrealistic expectations of Emily and her fellow Bachelorettes is because their on-screen relationships are similarly unrealistic. Conversations are limited to marriage, religion and #LifeGoals, but is that what anyone really discusses on a first date? If I were lounging in a nest of pillows with a total stranger, I'd want to know their opinion on an array of diverse topics (abortion, gay marriage, Gilmore Girls) before even considering a lip-to-lip commitment. But Emily astutely explained to me that "real life" conversations lead to the kind of drama The Bachelor isn't going for.

In I Said Yes, Emily writes about the moment Bachelor Brad Womack got down on one knee and proposed. What viewers didn't see was Brad picking Emily up and poking fun at her weight, something he knew she was sensitive about. I asked if audiences would have benefited from knowing the truth; that some romantic moments come with a side-dish of awkwardness. "I see why they took it out because it would have probably ruined the romantic moment they were creating," she said. "But yeah, you're on this high but then you're brought down really quickly."

That said, Emily did manage to forge bonds with her boyfriends—those bonds just didn't necessarily make it on screen. When I asked her if she felt comfortable enough to tell the men in her life about overdosing on pills in high school (an incident she discusses in her book), she said yes—she just waited until after the show ended and real life started.

Manufactured reality aside, there's something about The Bachelor's love journey that brings viewers back time and again. But as Emily points out, the show never changes its narrative and it refuses to progress with its audience: "It is the same formula every season. I'm like, why do I still watch this?" Her question echoes the views of many intelligent women who still watch The Bachelor, but I'm not sure there's an answer. Who knows why millions of viewers tune into the same story every year, but if The Bachelor wants to survive another decade, it should take a leaf out of Emily's actual book. Turns out the Girl Next Door has a lot to say.