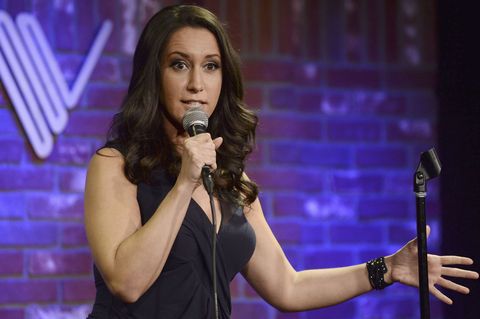 While Rachel isn't a certified sexpert (to quote: "I chip in. I do what I can"), she does possess the following attributes:

1. An awesome feminist perspective on love-making (sorry not sorry for using that expression).

So, basically exactly what we're looking for when it comes to someone to take sex advice from. MarieClaire.com got a chance to ask Rachel some taboo sex questions, so listen up, ya dig?

Marie Claire: What are the positions most women don't try that they should *definitely* be trying?

Rachel Feinstein: Is sitting on his face a position? It seems like you may as well kick it off with that, just so you guys can get used to it fast. I'm up for most things. As long as the idea behind it isn't to actively humiliate me in some way, I'm like "Yeah, why not?"

MC: What's a huge red flag when having sex with a guy for the first time?

RF: A belly button ring. I went out with a guy who had a belly button ring, and I was like, "I can't be the girl underneath you while your yin yang charm hits my stomach." It's unacceptable. It was alarming. I asked what the last woman said about his belly button ring and he was like, "she never said anything." I was like, "that's the most insane sentence I've ever heard. Who is this faceless victim. Can I reach out to her somehow?"

Also, I went out with a guy that shaved everything. I prefer no tinkering. Just leave your body, stoppit.

MC: How do you tell a guy you're on the ring before having sex the first time? Lots of men claim to "feel it."

RF: Just give a quick head's up, like, "you're gonna bump against that when you get inside me." I feel like guys complain about a lot of things, but when it comes down to it, they're going to have sex with you. They wanna be inside you, so they just have to deal with whatever road block comes along the way.

MC: How do you get a guy to give oral sex without being like "YO, GO DOWN ON ME!" and killing the mood? I've had friends whose partners waited months.

RF: That's unacceptable. If they're not doing that pretty soon, what's the point? And if asking for it kills the mood, he's not the right guy. Honestly, a lot of women need that to have an orgasm. It's not just a whacky stop along the way for most women, it's a necessity.

MC: How do you politely tell a guy that you won't swallow?

RF: Just ask if he has a sink nearby?

MC: That won't ruin the vibe?

RF: Just say it in a breathy voice. Say it in a Kim Cattrall voice. Or make sure to keep a dainty tissue nearby.

MC: How do you fake an orgasm without it being super obvious?

RF: I've stopped doing it. I'm like "lemme go ahead and try to get what I need to achieve one." My advice is, get it girl, say what you gotta say. But if you are going to fake it, I feel like you just need to remix the traditional noises with something confusing so it seems more natural. Mix in one or two heinous cries. Something jarring so they're like, that's not natural. But a confident guy knows it takes a while to figure it out and they won't internalize it.