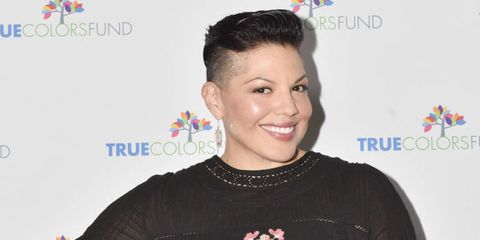 Sara Ramirez continues to speak out as an activist for the LGBT community. The actress, who played bisexual character Callie Torres for 10 years on ABC's long-running hit Grey's Anatomy, is calling out her old network for a biphobic joke made in a recent episode of The Real O'Neals, ET Online reports.

The joke, made in the January 17 episode, involved star Noah Galvin's character Kenny, who is openly gay, comparing bisexuality to having "webbed toes" or "money problems." Ramirez, along with other members and allies of the LGBT community, saw the joke as biphobic and a form of bi-erasure.

Ramirez, who came out as bisexual herself last year, took to Twitter to call out the problematic joke and encourage fans to sign a petition asking ABC to own up to the mistake and commit to better representations of bisexual characters in the future.

And as someone who worked 4 them 4 10 years+,am truly disheartened & disappointed quite frankly.I will invest my brand where I'm respected. https://t.co/NQQAPDsFlU

LGBT advocacy group PFLAG, which worked with The Real O'Neals on the episode, has issued an apology.

"We were so focused on the family acceptance portion of the episode that we completely missed the joke," saidLiz Owen, director of communications for PFLAG National, in a statement. "In hindsight, we should have caught it and we blew it. We should have done better and we will definitely do better next time. As allies we have a responsibility to own it when we mess up."

I asked @PFLAG (who partnered for the acceptance ep. in @TheRealONeal) for a statement on @Noahegalvin 's character bisexual joke. pic.twitter.com/lMdfoGCmwY