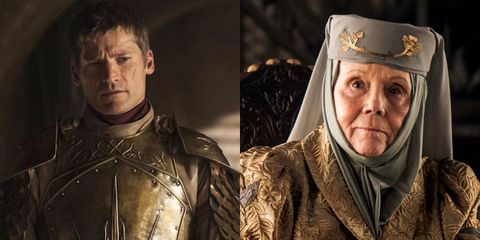 Warning: Spoilers about Game of Thrones Season 7, Episode 3, "The Queen's Justice" ahead.

Fans were prepared for a death on tonight's Game of Thrones, but the one we got was not the one we were expecting. Grey Worm survived the siege on Casterly Rock, but only because the bulk of the Lannister forces were at Highgarden to take out the last of the Tyrells: Olenna.

Nana Tyrell has long been a fan favorite. She's always the smartest person in the room and she was always ruthless when it came to defending her family. One of her most ruthless acts of defense was regicide.

Back in Season 4, she conspired with Littlefinger to take out King Joffrey Baratheon, a crime Tyrion was accused and later convicted of. Cersei was convinced that Tyrion was behind the murder and their father, Tywin Lannister, oversaw his trial and sentencing. Jaime was the only Lannister to maintain any sympathy for Tyrion, helping him escape (on the way out, Tyrion did kill Tywin).

Basically, the whole situation was devastating for the Lannister family and the final nail in the coffin of Tyrion and Cersei's terrible, terrible relationship.

Jaime comes in to finish off the Tyrell line himself, with a poison that he promises won't be painful (much nicer than the alternatives Cersei had proposed). After she guzzles the poisoned wine, Olenna confesses to Jaime that she was the one behind Joffrey's murder and tells him to pass that news along to Cersei.

On the surface, this is the last of many burns from a woman who spit more fire than all three of Daenerys' dragons combined. But, more importantly, Olenna used her dying breath to plant a seed with Jaime, who now knows that Cersei's crusade against Tyrion was unfounded. Their relationship is already strained, now that she's gone full Mad Queen and basically betrothed herself to Euron Greyjoy—this could be the push Jaime needs to turn on Cersei.

Maybe that Mad Queen fan theory about Jaime taking Cersei out will come true after all.