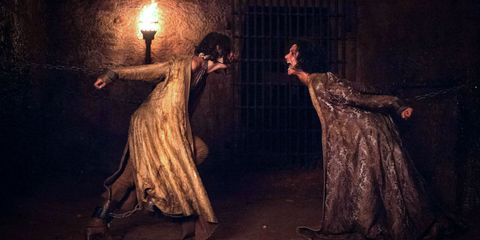 Game of Thrones doesn't do anything halfway. For a fantasy series, it's astonishing how realistic it can be—we wouldn't be that surprised if we found out they used real dragons and real ice zombies. During the latest episode of Game Revealed, one Thrones actress opened up about just how real things got during her intense torture scene in Season 7.

You remember the scene when Cersei Lannister enacts her revenges on Ellaria Sand, forcing the woman who killed Myrcella to watch her own daughter, Tyene Sand, die and then rot? How could you forget it:

Well, Indira Varma, who played Ellaria on the series, revealed that she and Rosabell Laurenti Sellers, who played Tyene, went through some very real trauma while filming the scene.

Related Stories
\'Game Of Thrones\' Actors Then and Now 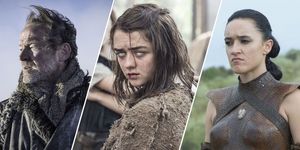 GoT Actors on Their Hardest, Scariest Scenes

"Rosabell and I had to wear manacles and we were tied to the wall and we had trouble, because either they'd come undone, because we were fighting against them, or couldn't get them off," she explained. "Literally, at the end of the day, I was like 'mate, I can't get it off, can someone help me?' and everyone's gone. Pete from props is like, 'I think we need a saw,' and I had to be sawn out."

That's dedication to art right there.

Kayleigh Roberts Kayleigh Roberts is the weekend editor at Marie Claire, covering celebrity and entertainment news, from actual royals like Kate Middleton and Meghan Markle to Hollywood royalty, like Katie Holmes and Chrissy Teigen.
Advertisement - Continue Reading Below
More From Celebrity
Kylie Threw Stormi the Most Elaborate Party
Chrissy and John Had a Post-Grammys Dance Party
Advertisement - Continue Reading Below
Selena Gomez Sent an Emotional Note to Demi Lovato
Nick Jonas Had Food In His Teeth at the Grammys
Why Isn't Beyonce at the 2020 Grammys?
Watch Demi Lovato's Emotional Grammys Performance
Beyoncé's Pre-Grammys Look
Blake and Gwen Were Too Cute at the Grammys
The Jonas Brothers' Grammys Performance Was a Lot
Alicia Keys Covers 'Someone You Loved'