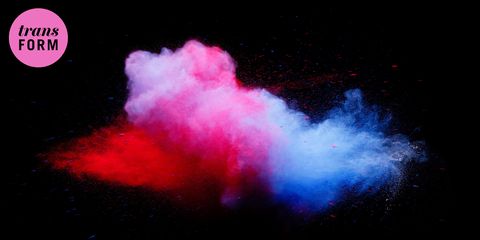 As quickly as our culture is progressing—same-sex marriage is now legal, Laverne Cox is strutting down red carpets, your grandmother wants to discuss Caitlyn Jenner—I still get cringe-inducing questions on a regular basis.

I am a transgender woman, and I'm engaged to a wonderful man. "Oh, so you're gay?" people ask, clearly trying to do the math in their heads. Someone with a penis loves someone with a penis—that's a gay couple, right? But no, the answer is no. I'm a straight woman in love with a straight man, a very simple truth in the middle of what seems, to many, like a complicated situation.

What attracts us to someone? Is it their possession of specific genitals, or is it their smile, their kindness, their smell in the morning? If you're, say, a straight woman reading this story, and you go on the best first date of your life (can't stop talking, can't stop laughing, at the restaurant so late they have to ask you to leave) and then you become intimate and learn he was born with a uterus—does that negate the connection you've found?

What attracts us to someone? Their possession of specific genitals—or their smile, their kindness, their smell in the morning?

I don't blame people for being confused. Confusion is something I know very well.

I grew up in a conservative, religious household, where any behavior that wasn't strictly and traditionally masculine was frowned upon—my birth certificate, after all, is stamped "MALE."I was expected to do manual labor with my dad on the weekends. If I cried, it meant I was weak. I wasn't allowed to cross my legs in church, for fear that the priest would kick me out of the congregation. Which, incidentally, he did anyway.

But since I was 13 years old, I knew I was a girl. It felt the same as how it feels to know the color of your hair or the shape of your hands—it was simply true, even if people on the outside couldn't see it.

For a long time, I thought I was gay. Even when I started identifying as female, I thought, "Well, I'm not fully female yet, so I guess I count as gay." But I've always been a woman on the inside. In fact, I decided to forgo gender reassignment surgery during my transition. I don't need a vagina to affirm my gender identity. The truth is, I'm a woman, and I'm straight.

LGBT: lesbian, gay, bisexual, and transgender. Even though the acronym is ubiquitous, it can be admittedly confusing. As GLAAD explains, the first three letters indicate sexual orientation, but the last refers to gender identity, which is a different thing altogether.

Gender is defined by your sense of self, whether you identify as male or female (or both—gender fluidity, thanks to icons like Ruby Rose, is now on more people's radars than ever before). Then there's sexual orientation, defined by who you're attracted to. They're completely independent, though oftentimes conflated.

I try not to wonder what's going through people's heads when they look at me.

The American Psychological Association breaks it down well: Like cisgender people, transgender people can be straight, lesbian, gay, bisexual, or asexual. Some research has found that sexual orientation can change during a transition. More often than not though, transgender people stay in love with their significant other before, during, and after gender reassignment surgery, if that's the option they choose.

We define our sexual orientation based on our gender identity: I'm a transgender woman who's in love with my male fiancé, so I'm straight. A transgender man attracted to other men would more likely identify as gay.

I try not to wonder what's going through people's heads when they look at me. Expressing my gender publicly, while maintaining the sexual orientation that's always been mine, brings me a joy and confidence my 13-year-old self could only imagine. I hope that's a concept most people can understand.