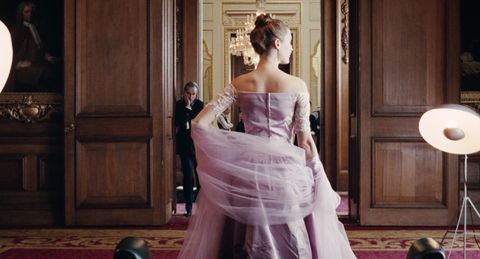 What was Phantom Thread about? That's the question I asked myself, my friends, and actress Vicky Krieps when I got a chance to interview her about the Paul Thomas Anderson-directed movie—starring Daniel Day-Lewis as Reynolds Woodcock, an egomaniacal fashion designer consumed by his own genius.

"By accepting her weakness she becomes so f*cking strong in the end—even stronger than him."

On the surface, Phantom Thread is a visually lovely film about an artist and his muse, or, depending on how you look at it, a muse and her artist. Or maybe it's about control and abuse? Or about love? Or Stockholm syndrome? The film is infinitely complex, and its strength doesn't just lie in jaw-dropping costume designs and a fierce final performance from Day-Lewis (the supposed last of his career). It lies in the fact that it stays with you. Like a good book, or a great painting, Phantom Thread keeps asking you to search for its deeper meaning.

But the movie is also disturbing: Day-Lewis (who employed method acting for the film) is clearly emotionally abusive towards Krieps' Alma, and she in turn is physically abusive toward him. Here, the actress talks to MarieClaire.com about her role, working with Day-Lewis, and what the movie was really about, at least in her opinion. Note: Spoilers ahead.

On why there isn't a sex scene in the movie:

"We did talk about it, and Paul Thomas Anderson's answer was that he wanted to make a movie set in the '50s, and one thing that strikes you about these movies is you don't see them making love. They kiss. Leaving it open made Reynolds and Alma's relationship stronger. We see him take her into his room, but we never talk about it—we leave it to the viewer. Sexuality isn't something you create. It is between people, and then it just happens. It wasn't something we thought about, but it was in the lines. If Alma says to Reynolds, 'Are you thirsty,' it's there. It's a clever way of trusting the audience to feel something."

On when Reynolds realized Alma was poisoning him:

"We talked about it many times and it's on purpose that you don't know when, and it's on purpose that maybe Alma and Reynolds didn't exactly know when. We said he probably realized when she's reading the poisoned mushrooms book, but then also it's called Phantom Thread. Many things in the movie feel like there's a ghost—it's almost as if a ghost told him, 'Listen she's going to poison you.' There's something in the movie you cannot explain, and you shouldn't. It's meant to be like this."

On Daniel Day-Lewis being method...while playing a verbally abusive man:

"The rudeness of Reynolds didn't get to me between the takes, even though Daniel was in character almost the whole time. But the rudeness itself wasn't something I experienced the whole time, luckily—that would have been awful. However, the intensity he had was always with him. I had to give room and make space for his intensity and it was really f*cking hard. Like walking up a mountain barefoot. It was a lot of work to be so quiet, and so restrained, and so taken aback, and just leave him be. That was something I had to not endure, but support, for three months."

On whether she sees Reynolds and Alma's relationship as abusive, and on the movie coming out in conjunction with the #MeToo movement:

"I had to accept that she loves him as a given fact. Otherwise it would have been much more difficult. If this was happening to me, Vicky, I would ask myself many more questions, such as, 'How did he just talk to me?' Alma is able to be open to it, sit back, watch, and say, 'Let's see what happens.' Which I find great, especially nowadays with what they're talking about now—the black dresses at the Golden Globes, etc. I think women are strong and they have never been weak. I know absolutely what women are talking about, and I also know abusive men. But I think this topic would sometimes need a much more paused approach, where you step back and have a look at the subject and say, 'Wait a minute what is it we are talking about?' I think then we would see that women have always been super strong."

On how she got through such a challenging role:

"When I got the script, I had a strong connection to the language, almost like how you feel for poetry—you connect to the rhythm and imagery of the words, but don't have a concrete idea why. It comes from your belly. This is how I felt when I read the script—it was something I could hold onto and follow with my instincts. In order to make Alma innocent and open, I had to forget that I'm stressed as an actress because I'm making a film with Paul Thomas Anderson. I had to let go of everything and hold onto the text. The language was like a rope I could cling onto and make my way blindfolded through the shooting."

On what the movie is really about:

"I see it as a love story. You can say many things, but in the end it's love. Not a love story, but a film about love. Love for your work, love for another person, love for yourself. Love is a huge pond, and it's never empty. You can go and take from it and it will give you strength. Many people live in the wrong idea that love is something you cannot give away too much, that you can only give it if you're sure you're getting back—but I think love is the one thing in this world where you don't have to get it back. Phantom Thread is a story about a woman being submissive under a man, but Alma's strength is to say, 'I am ready to love you just because I want to. I can love, and I can give love, just because it's what I want to do. I don't need your approval.' Even if it means she's weak, by accepting her weakness she becomes so f*cking strong in the end—even stronger than him."

Mehera Bonner Contributor Mehera Bonner is a news writer who focuses on celebrities and royals—follow her on Instagram.
This content is created and maintained by a third party, and imported onto this page to help users provide their email addresses. You may be able to find more information about this and similar content at piano.io
Advertisement - Continue Reading Below
More From Culture
Differences Between 'The Undoing' Book and Novel
'The Undoing' Director on the Polarizing Finale
Advertisement - Continue Reading Below
The Warmest, Coziest Gifts for Their Next Night In
An Ode to the World's Best Haircut: The Mushroom
Yes, Prince Charles Really Survived an Avalanche
How to Join Marie Claire's Online Book Club
'Cobble Hill' Is Our December Book Club Pick
Emma Corrin Shares Unseen 'The Crown' Snaps
'The Great British Baking Show': Who Is Peter?
The Most Romantic Movies of the Year