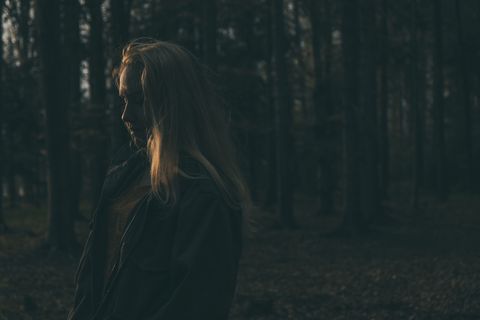 I stared down the footpath, pale dust rising in the infinite sunlight. I felt unsafe. There were people near me, I was sure, but I couldn't see them. I passed a yellow square sign, like a road sign: ¡Cuidado! No exponga su vida a los elementos. ¡No vale la pena!

There was no English translation, but I could tell that it said: Warning! Do not expose your life to the elements. Not worth it!

And there was an illustration of a sun, a cactus, a rattlesnake, and water waves in a circle with a slash through them: no water. These were the dangers of the desert, and people confront them and sometimes die on their journeys to live in this country. I thought then of the stories I would have to someday tell my own children: dropping out of college, raped. Self-exiled, walking across the desert. I felt in a hotspot in my gut that I might be a dropout, ever after.

I thought then of the stories I would have to someday tell my own children: dropping out of college, raped. I felt in a hotspot in my gut that I might be a dropout, ever after.

A sole cloud drifted like a balloon; the sun blinked. In shadow I saw the dry hills more clearly. I could enter this gorgeous world where nobody knew me and start over. The path unfolded beneath me, and I followed it.

I bit into a green apple, then saw I'd nearly stepped on a rattlesnake, just skimmed its edge; the snake lay across the trail like the shadow of a branch, at least three feet long. Its brown and beige mosaic, stark and distinct against dust. I shrieked.

It rushed over the bone-colored dirt with impossible speed and into a hard-leafed creosote bush, its rattling fast and hollow, more menacing than any human sound. I ran back south a hundred yards; I was fine. I stood and breathed a minute, then walked back north, kept walking, watched my feet quickly move.

Again I bit my apple, breathed, chewed—my last piece of fresh food; everything else was processed or salted or junk. I already regretted eating the fruit so soon.

The snakes were endless, the venom of their bite deadly. The Mojave Green rattlesnake, a pit viper native to the deserts of the southwestern United States, is infamous for its potent, debilitating neurotoxic venom. Chance of survival is good if medical attention is sought within minutes of a bite – fair if within an hour. But after that serious symptoms rapidly develop: vision abnormalities and difficulty swallowing and speaking. Skeletal muscle weakness leads to difficulty breathing: respiratory failure. In cities, fatality is uncommon—anti-venom is effective—but the untreated bite of a Mojave Green is fatal. Which meant, for me, a bite would be fatal.

Yet looking up that dusty path into desolation, basking snakes weren't threats I actively considered. In retrospect, it's stunning to think how the most damaging threats were also the most common and how easy it was to die. Only about five hundred people arrive each spring at this trail from Mexico to attempt to hike the whole way to Canada, and fewer than half of those—some odd 200—will make it all the way. In all of history, fewer people on the planet have walked along the Pacific Crest Trail the whole way from Mexico to Canada than have summited Mt. Everest. And each year—every single year—some hikers die.

The walking itself was shockingly easy, the trail gradually descending, ascending, a smooth dusty path through fields of brittle grasses, hard chaparral shrubs and greying cacti. Lonely blue mountains so pale they were almost ghosts against the sky spread at the western horizon. I now stepped over basking snakes as if they were only sticks.I walked briskly without stopping. It amazed me how quickly I'd gotten used to snakes and I didn't know if I was brave or reckless.

Excerpted from Girl in the Woods by Aspen Matis (HarperCollins), due out September 8.