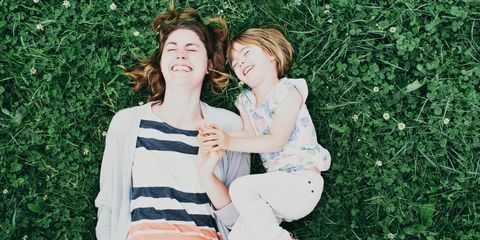 I am, for now, an aunt, which is not something you do, but something that's done to you.

I wasn't ready to be bumped up a generation at age 20, when my sister had my first nephew. I was the baby of the family, and if anyone was going to be fed, showered with affection, and rocked to sleep, it was me.

Besides which, in American families, particularly ones spread over the map, the aunt can feel like she has no defined role. It's as if you could be there or not. In my case, everyone else's focus seemed to be shifting to the nucleus of their new families, and suddenly I felt like scraps left over from the old.

But I've started to recognize the potential in aunt-dom. In fact, with more women choosing the single life now than ever, being an aunt might very well be what lots of us aspire to, and proudly. If I'm never going to have kids, and it looks like I might not, aunthood is a distinctive way for me to be a part of someone's childhood—and to have children in my life in a way that suits us both. So I set out to create an aunthood that means something.

"I set out to create an aunthood that means something."

Preparing for active aunthood means getting myself together, a bit. My sister and mom friends can't sit on the phone all day and listen to my panics about life and work and back fat. They need help; they need a person who's going to come over and offer to make the macaroni and cheese.

The kids in question aren't just from my own immediate family (I have three nieces and nephews now), but also an extended band of friend-family children for whom I am Aunt Paulette. I want to remember their birthdays and get them gifts. I want to visit them often, and bring them things they've never seen before, like coins from Myanmar or moss from Seattle. I want to take them to museums and explain art, though I often don't understand it myself.

These are a lot of the same things that parents probably want to feel: the sense of connection with a child. But what I've cherished most about my own aunts and uncles is the sense that they love me nearly as much my parents—even though they aren't. There's this feeling of choice that goes both ways. Whereas your parents have to deal with you, your aunts or uncles could choose to love you or ignore you.

The author and her nephew.
Courtesy of Paulette Perhach

Yet when I try to love my nieces and nephews—to be the cool aunt—it often gets me the stink-eye from parents. What I think of as fun often involves heights, speed, or sugar. There seems to be some concern about getting children "riled up" that I keep hearing about. But as the aunt, my stance is this: Sure, we need to learn to follow rules. But the value of breaking rules is also an aspect of life worth examining. It's perhaps a part that, for some families, can only be illuminated by those not in the role of parent.

I try to be the fun aunt, the aunt the kids run to the front door to greet. I dread becoming the stinky aunt, or the chin hair aunt, or god forbid the aunt who even the children can tell is not okay, the aunt of whom their parents will later say, "Aunt Paulette never did her homework either, and look where that got her." I'm a bit weird―I'd be eccentric if I could get my hands on some real money—but it's not like I'm sitting in a crusty trailer doing lines of Dorito powder.

Therein lies the ultimate stigma about being an aunt and an aunt alone: that I must somehow not be a functional person.

I want being an aunt to be the life I clearly chose, instead of a life that happened to me. I want to be seen as a valuable human, even though I'm not a mom.

"Therein lies the ultimate stigma about being an aunt and an aunt alone: that I must somehow not be a functional person."

I remember one night when I was visiting my friend and her 1 year old, and she went to bed, exhausted. From the living room, I heard the baby start to cry. I was like, okay, I'm going in. I picked him up, smiling at the flour-sack weight of this little human. He tugged at my shirt, and I enjoyed the idea that he might confuse me for a mother. I sang a little, feeling self-conscious. He soon fell asleep, and I tried, awkwardly, to put him back in the crib, waking him up. "Rookie move," I whispered. I rocked him again, then leaned over with him still pressed to my chest, and lowered him in that same position the last few inches to the mattress, where he slept. I helped, was my thought, and it gave me a tiny joy.

I'll always wonder if tiny joy is enough. But, as an aunt, I will make my own life enough. I will have my certain kind of freedom, and these moments: my niece wanting to sit next to me, the look on my friend's 9-year-old son's face when he realizes I'm only kidding.

This content is created and maintained by a third party, and imported onto this page to help users provide their email addresses. You may be able to find more information about this and similar content at piano.io
Advertisement - Continue Reading Below
More From Culture
How to Join Marie Claire's Online Book Club
Read 'Plain Bad Heroines' With Us in November
Advertisement - Continue Reading Below
'The Undoing' Is Based on a Beloved Book
Who Is Hugh Grant's Wife?
Queen of the Screen
The 12 Sexiest LGBTQ+ Movies Around
53 Wild and Completely Iconic Vintage Porn Films
Dale Moss Is a Super Important 'Bachelorette' Star
It's Been a Weird Year for 'The Bachelorette'
Political Books to Read Ahead of Election Day