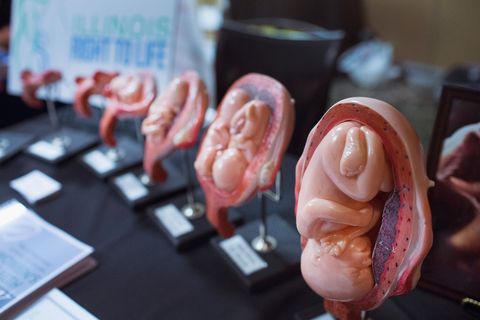 In seventh grade, I wore a silver pin in the shape of tiny feet on the lapel of my Catholic school uniform. The feet were the approximate size of a fetus's feet at 10 weeks into its gestation. All the cool girls in my class wore them—they were a symbol of our pro-life beliefs.

As early as I can remember, we were showed images of bloody fetal parts after they'd been extracted, an errant hand or even torso. They gave us rubbery fetus dolls at every month of development, to show how fully formed (and cute) they could be. And of course, we had our little feet pins.

I thought abortion was gross, and creepy, and wrong. It was inconceivably selfish. What would ever make a woman kill her baby?

Then came the 2000 presidential election.

Our homework that night was to color in a map of the United States, filling in the blue states and red states as each were announced. I laid on my stomach with my worksheet, watching CNN with my mother. "Who did you vote for, and why?" I asked her.

"Gore," she replied. She rattled off which aspects of his platform she agreed with, but I only remember the one. "And he's pro-choice."

I was as shocked as if she had told me she skinned kittens for a hobby. "Mom, you're pro-choice?" I felt ill. My mother, this amazing, strong, smart woman, believed in killing babies?

She calmly explained that she'd had an abortion at age 18. She walked me through the whole story: She really liked a boy, and shortly after her 18th birthday, she decided to lose her virginity to him. She became pregnant—yes, pregnant after her first-ever sexual experience, it was like a Seventh Heaven episode—and a friend took her for an abortion the week of her high school graduation. She described lying on the couch that hot week in June 1978, crippled with cramps and missing all the good graduation parties, hiding the pain from her parents.

"It was the right thing to do," she told me. I sat quietly, mouth agog, feeling shocked and sad but also privileged that she considered me to mature enough to hear this. "Your grandfather would have thrown me out of the house. Everyone would have been mad at me. I wouldn't have been able to get a job or spend time with friends. I don't regret it. I wouldn't have you or your brother otherwise."

It was almost too much to handle. My mother was my hero, someone bigger than a role model. She was funny and vibrant and compassionate and patient and loving. Essentially, she was—she is—a wonderful mother.

Oh, she didn't want to kill her baby for the sake of killing it, I realized. Oh. She wasn't some slut. She did care. That's why women get them. Oh, it was unpleasant. Oh, I see. Oh.

She didn't want to push her beliefs on me, she explained. I could make them on my own.

Maybe everyone has a similar story, an instance when you realize your parent isn't perfect. This isn't quite that story for me. For me, it was the moment I learned that my mother had a long, complicated, interesting, full life before I came into it. Her stories and memories and choices weren't always just fun, or just happy, or just sad. They were layered.

But then, how could my mom have let me walk around her house with a freakin' fetus-feet pin on my polo shirt? She didn't want to push her beliefs on me, she explained. I could make them on my own. And so I did.

I chose to take off the pin.

I trusted my mom endlessly, implicitly. If she were the type of woman who got an abortion, then any woman might find herself in that situation. At 12, I didn't yet have the stream of words, labels, and euphemisms that I'm happy to apply to myself now: pro-choice, feminist, an advocate of family planning and comprehensive sex education and women's reproductive rights. But I'm so glad she chose to be honest with me. I'm so glad I asked.