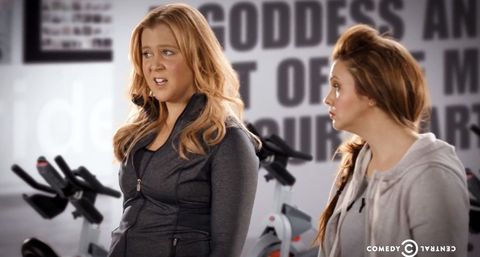 Sometimes, a Vitamin Shoppe is just a Vitamin Shoppe, but Amy Schumer gets that, under the right circumstances, some of us might interpret it as The Universe sending us A Sign to start taking calcium supplements. Fair.

In this newly released and (naturally) hilarious sketch from Inside Amy Schumer, our nation's clearest-eyed professional parodishas Bill Nye and his best PBS Nova voice define the universe not as "a chaotic collection of matter," but as "a force sending cosmic guidance to white women in their 20s." Cosmic guidance to do what, exactly?

This content is imported from YouTube. You may be able to find the same content in another format, or you may be able to find more information, at their web site.
Chelsea Peng I'm Chelsea Peng, the assistant editor at MarieClaire.com.
This content is created and maintained by a third party, and imported onto this page to help users provide their email addresses. You may be able to find more information about this and similar content at piano.io
Advertisement - Continue Reading Below
More From Culture
New Drama Movies That Promise to Move You
The Sexiest New Movies of the Year
Advertisement - Continue Reading Below
A Look Back at Princess Anne's Life in Photos
Where Is the Cast of 'Gilmore Girls' Now?
'The Bachelor' Is Back!
Who Is "Queen" Victoria on 'The Bachelor'?
Matt James' 'Bachelor' Cast: Everything We Know
Get to Know Serena Pitt From 'The Bachelor'
The Best Lesbian Movies Streaming on Netflix
Listen to the Best New Love Songs of 2021 (So Far)