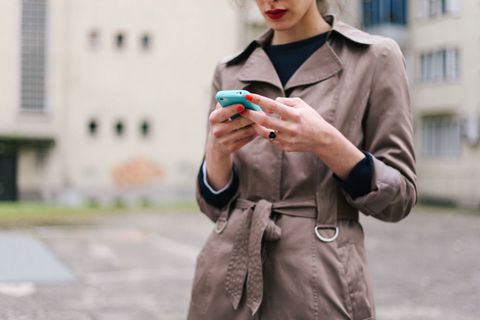 Even though we live in a world where people can basically communicate solely in emojis, there's one modern-day texting conundrum that lives on: Why does ending a text with a period feel *so* wrong? In a new post on academic publication The Conversation, Lauren Collister, a sociolinguist from the University of Pittsburgh, reveals why the period has become such a problem.

Periods, in their original use, are so simple and so very innocent: They end a sentence or a thought. But now that so many people omit periods from a text—even if they're signaling the end of a conversation—the way we interpret a period in a text has also changed. Now, a period is the enemy.

Collister writes that the problem with periods evolves from situation code-switching, which is how an individual changes how they speak depending on the context.

"When you end your text with a period, it's like using formal spoken language in a casual setting like a bar."

For example, you might say something like "thank you for meeting with me today" at the end of a job interview, but it would sound overly formal to say that the end of a date. That's situational code-switching, and it's a tool you use without even realizing it because it seems only natural to change how you speak between your bestie, your grandparents, and your boss.

Situational code-switching is now an essential part of written communication, helping to navigate between the formal and informal conversations. With the rise of texting and social media, a more relaxed writing style in texts has taking precent over the old school, formal writing style. The period falls into the formal category, so it's use in texts just seems...wrong.

Now, according to Collister, using a period in a text can even be perceived as angry or standoffish. "When you end your text with a period, it can come across as insincere or awkward, just like using formal spoken language in a casual setting like a bar," Collister writes.

But, thanks to this code-switch skill, the death of the period is only present in texting conversations. Collister writes that individuals "know to put that period at the end of every sentence in a formal writing assignment," but also know that a period is too formal for an everyday text.

"It's a bit counterintuitive, but using formal language may undermine the sincerity" of a text message, Collister writes. "This may explain why some people's text messages seem stilted or awkward: they're used to writing with a formal style that doesn't translate to the casual medium."

So the period lives on, just not in texts.

Maggie Maloney Associate Digital Editor Maggie Maloney is the associate editor at Town & Country and ELLE Decor, where she covers style, beauty, jewelry, and the many members of the royal family.
Advertisement - Continue Reading Below
More From Culture
Treat Yourself to a Chick Flick Tonight
Who Will Be on 'Bachelor in Paradise' in 2020?
Advertisement - Continue Reading Below
An Investigation Into the Next 'Bachelorette'
'The Bachelor' Has Already Finished His Season
Can We Talk About Kelly's Mom From Love Is Blind?
The Best Reactions to the 'Love Is Blind' Finale
Hilary Duff Hints About 'Lizzie McGuire' Reboot
Ryan Murphy's Producing a Love Letter to Hollywood
This Is When the 'Love Is Blind' Finale Will Drop
Will Gigi and Damian Actually Get Married?