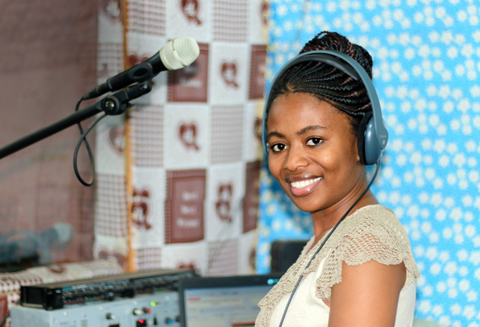 Courtesy of the subject

Women in the Democratic Republic of the Congo, known as the "rape capital of the world," are often portrayed in the media as tragic figures. Douce Namwezi, a 28-year-old Congolese journalist, was tired of seeing the same clichéd stories and felt that career-oriented women like herself in the country's emerging middle class were being overlooked. "Congolese women aren't just victims of rape or economic hardship," she says. "We are dynamic—we're leaders, we're friends, we're mothers."

The work hasn't been easy. It took four years to make the station a reality, and keeping it in business amid an ongoing civil war and a lack of infrastructure and funding is a challenge. Namwezi even had to overcome nay-saying male colleagues at competing radio stations who said that the station would fail within a month. Instead, one year and 2 million listeners later, MAMA Radio has become the talk of the town.

"It's really important for women to tell their own stories."

Last March, Namwezi founded MAMA Radio, the nation's first radio station by and for women. While other local stations play rumba tunes or discuss the latest football match, MAMA Radio has run segments on why it's OK for women to wear pants and the challenges of being a military wife, and hosted a call-in show on birth-control options. The 23-person staff also solicits stories from non- journalists, women who, Namwezi says, are told by society that they are to be seen, not heard. "It's really important for women to tell their own stories," she says. "We teach them how to do everything from holding a microphone to developing a narrative."

This content is created and maintained by a third party, and imported onto this page to help users provide their email addresses. You may be able to find more information about this and similar content at piano.io
Advertisement - Continue Reading Below
More From Culture
Avengers Fans, Assemble: 'WandaVision' Is Here
Where Is Night Stalker Detective Gil Carrillo Now?
Advertisement - Continue Reading Below
What We Know About Part 2 of 'Lupin'
A Look Back at Princess Anne's Life in Photos
Where Is the Cast of 'Gilmore Girls' Now?
The Most Hotly Anticipated TV Shows of 2021
This TikToker Turned 'Bridgerton' Into a Musical
There's a New Netflix Doc About the Night Stalker
Where Is Richard Ramirez's Wife, Doreen Lioy, Now?
Mainstream Movies With * A LOT * of Nudity