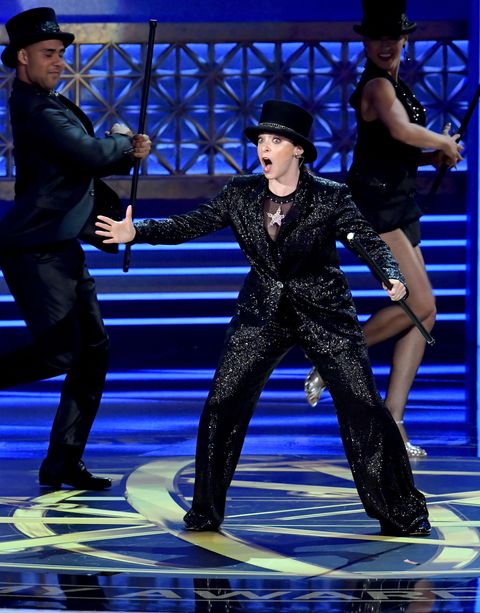 I would not call myself fancy. The closest I get to "dressing up" in my day-to-day life is not wearing jeans and *maybe* opting for some block heels. So when I was invited by Sterling Vineyards to attend this year's Emmys as their guest, I was 1) excited to have a reason to get dressed up 2) excited to drink some wine and 3) excited to see what going to award shows as a somewhat Normal Person is all about. Here, my biggest takeaways from the night.

1. Seat fillers are not playing around, and the logistics are kind of mind-blowing.

While heading to the red carpet, I noticed a huge line of beautiful people wearing sparkly dresses and tuxes. "Who are they?" I thought, before seeing the sign—seat fillers. If you're not aware, these are the people who have the job of filling the seat of those who accept awards, present, or get up for any reason, to make sure the auditorium looks full at all times, while getting the perk of seeing the show. Every commercial break, groups of people would be ushered around the auditorium by a member of staff, rushing to fill all the empty seats like a well-oiled machine, and it was damn near mesmerizing. THEY ARE QUICK.

2. There are a lot of fake Emmys floating around.

When a winner is presented with an Emmy on stage, that Emmy is immediately taken away from them. Then, they are given another to pose with for pictures. Finally, they are given their REAL Emmy, which they need to take to the Winners Circle at the Governors Ball after-party to have engraved. (John Lithgow forgot this part, FYI—but don't worry, he found his Emmy.) Thankfully, those in the Winners Circle also got to sip Sterling Vineyards Iridium Cabernet Sauvignon 2014. At $250 a bottle, award winners even got their own engraved bottle, which is basically like another Emmy, right?

3. Those in the audience are just as big of fans as those at home.

Those in the "Normals" line on the red carpet couldn't help but try and get a look at everyone hitting up the press on the other side. (We see you, Sofia Vergara.) Everyone was buzzing on the red carpet, in their seats, and in the concessions line about who would win and why and what they were wearing, and I thought "Oh, so everyone does this." The biggest applause and shouts of the night went to all the crews of the late night shows, who clearly love their jobs and lives. And let's talk about the standing ovations—Norman Lear and Carol Burnett; Cicely Tyson; Lena Waithe; Dolly Parton, Jane Fonda, and Lily Tomlin...it was a night of appreciation and celebration, to say the least. 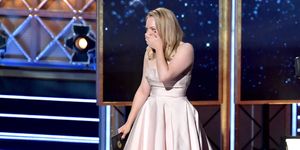 This Got Elisabeth Moss Bleeped at the Emmys

4. Speaking of ovations and speeches, censors have to be on high alert.

Censors are on a 7-second delay, meaning they hear the actual broadcast in one ear on their headset, censor it as it's happening, and hear the censored version 7 seconds later in the other ear. Forget speeches—that is nerve-racking.

5. The after-party is the biggest seated dinner in America.

The Governors Ball feeds more than 4,000 guests. Yes, you read that right. This year's theme was "Golden Grandeur" and the party took over the Los Angeles Convention Center, with 5,000 gold-colored tubes decorating the ceiling. As the official sponsor, Sterling Vineyards provided 5,040 bottles of Cabernet and Sauvignon Blanc—that's nearly 25,000 glasses of wine downed during the evening. Insane.

This content is created and maintained by a third party, and imported onto this page to help users provide their email addresses. You may be able to find more information about this and similar content at piano.io
Advertisement - Continue Reading Below
More From The Emmys 2021
The Best Reactions to Zendaya's Emmy Win
Zendaya Wore Two Stunning Outfits for Emmys Night
Advertisement - Continue Reading Below
The 2020 Emmys Had a Confusing Vibe
Tracee Ellis Ross Is a Queen in This Gold Dress
'Schitt's Creek' Swept the 2020 Emmys
Regina King Wore a Breonna Taylor Shirt to Emmys
The Best Celebrity Instagrams From The 2020 Emmys
What Celebs Are Wearing to the Emmys...From Home
The Emmys Will Have a Red Carpet This Year
What Everyone Wore to the Emmys After-Parties