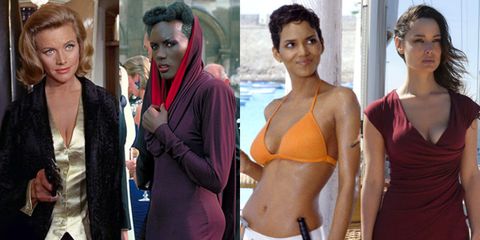 Bond girls—they may have the obligatory good looks, but there's always more than meets the eye. Whether fighting the good fight or being unapologetically evil, these high-stakes enigmas have evolved right before our very eyes. (As, of course, have their costumes.) Here, a look back at 25 of the most memorable Bond girls to date—plus the three new Bond girls of Spectre.

The Swiss-born beauty played Honey Ryder and donned the most famous bikini of all time: a white cotton number with bottoms outfitted with a British Army belt, brass knuckles, and a knife holder. The swimsuit was such a sensation it caused sales of bikinis to skyrocket.

The first runner up in 1960's Miss Universe pageant, she studied ballet for right years and was a professional model. In the film (Sean Connery's favorite of the series), she played a Bolshevik corporal sent to entrap James Bond.

Blackman, who also starred in The Avengers, played Pussy Galore, who was a total badass and was said to be inspired by the love of James Bond writer Ian Fleming's life. "Pussy Galore was a career woman–a pilot who had her own air force, which was very impressive. She was never a bimbo," Blackman told the TV Times at 80-years-old.

In the forthcoming Spectre film, Seydoux plays Dr. Madeleine Swann, a psychologist working at a medical clinic in the Australian Alps. " I don't consider myself a Bond girl. I think I'm not really the stereotyped Bond girl. I feel quite different. You can't be like, 'Oh, James.' You have to find something else. She's not a fighter, she's a doctor. She fights in another way," she said in an interview.

In the film, 51-year-old Bellucci plays mob widow Lucia Sciarra and says the film is "in some way revolutionary" in its treatment of women. Considering that the average age of Bond's love interest was around 29, we whole-heartedly agree.

Sigman, who plays the elusive Estrella is the first Mexican actress to play a Bond girl. "I'm a very proud Latina and a very proud Mexican, so it feels great," she told us when we chatted with her last month. "That's who I am. The fact that I get to show them my country, and that the whole world is going to see it and it looks absolutely beautiful feels amazing. There's no other way I could have done it.

Next
The Craziest Costumes from Comic Con 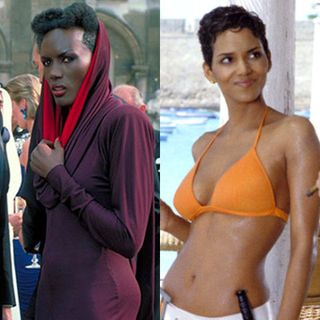 Advertisement - Continue Reading Below
This content is created and maintained by a third party, and imported onto this page to help users provide their email addresses. You may be able to find more information about this and similar content at piano.io
More From Culture
Meet the Cast of 'Too Hot to Handle' Season 2
'Bachelor In Paradise' 2021: Everything We Know
Advertisement - Continue Reading Below
Meet the Cast of Katie's 'Bachelorette' Season
Simone Biles: "Don't Be Ashamed of Being Great"
68 Movies That Are Just Fully About Sex
Everybody Loves Annie
The Beachiest Beach Reads of All Time
This Summer, Let's Escape
Films That Pull Back the Curtain on Royal Life
'Succession' Season 3: Everything We Know So Far