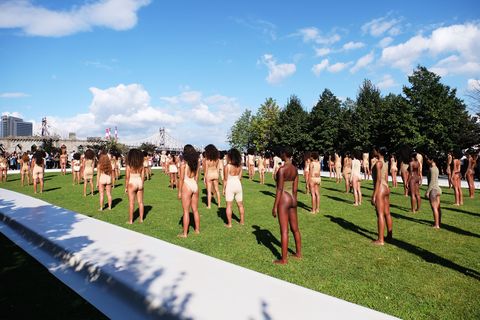 On Tuesday night, Kanye West tweeted out a series of 34 photos from the latest Yeezy ad campaign, shot by frequent Kardashian-West collaborator Eli Linnetz (there are more snaps on Linnetz's Instagram) and ostensibly promoting the Yeezy 500 Super Moon Yellow sneaker.

And there are definitely sneakers in many of the photos! (Scroll to the bottom of this post to see an even wider selection of them.) But let’s be honest: That’s not why we’re looking at this campaign.

Hey, is that a Kim doppelganger?

Even though it’s pedantic to start sentences with the phrase “as a feminist,” as a feminist, I have a lot of feelings about these ads. Should I be offended by them? Should I celebrate them? I have no idea! Why is the burden of feminist thought on feminists?!

1. This campaign is really diverse! Lots of colors, sizes, ages, and looks represented. And, honestly, I don’t hate those sneakers (though I probably wouldn’t pay $250 for them either, but that's just me).

2. And it doesn't escape me that only women are naked in these pics, which feels a little exploitative. And seriously, what’s up with the Kim Kardashian doppelganger? It sort of reminds me of the “Famous” video that featured a naked Taylor Swift ringer. I mean, obviously this is different because Kim is married to Kanye and could therefore give her consent.

3. OK, but how is that full-frontal nude shot promoting sneakers? Like, I get that fashion campaigns are artistic expressions and fine art has long been the exception given when claims of objectification are volleyed at an artist’s work. But there’s a lot to be said about the fact that the history of art actually is super sexist. We can’t change that history, but artists can try to move forward responsibly without trying to make claims that, because their male gaze-y vision actually fits into a long history of similar work, it’s somehow off the hook. Right?

4. Then again, one of the big reasons that depictions of naked women are considered controversial is because of a patriarchal history that’s cultivated fear and revulsion toward the nude female form, so IDK! Maybe we’re supposed to embrace it more to make up for lost time?

5. But also, Eli Linnetz and Kanye West are both cis men, so their “celebration” of the female nude could just be objectification by any other name. Like, wouldn't the best way to make up for that sexist history be to amplify the work of female artists who celebrate those forms?

6. And furthermore, it sort of seems like Kanye West sometimes confuses contradiction with nuance, like how in 2005 he bravely spoke truth to power when he said that “George Bush doesn’t care about black people” at a Hurricane Katrina benefit, but is now buddy-buddy with Donald Trump, a president who courts support from KKK members. Maybe some opinions are just bad!

7. What were we talking about again? Oh yeah, sneakers.

You know what? Never mind. I need a palate cleanser, ideally in the form of Kim Kardashian’s future campaign ads for Space President.