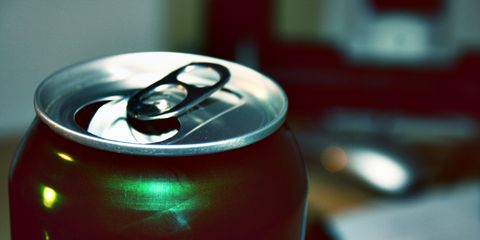 It's kind of shocking that in 20effing15, we're still having to fight for access to birth control. Lest we forget where we came from, we've rounded up all the weird, wild measures women have taken through history to get the job done. Are you listening, Congress?

The Ancient Egyptians believed that crocodiles—associated with the god of miscarriage—and their dung could kill sperm. The honey was used in conjunction with herbs and cotton to create a barrier to block sperm's entry.

In Medieval times, people thought that wearing weasel testicles as jewelry—such as medallions—would ward off conception. The logic still escapes us, but on the bright side, it also doubled as statement necklace!

Around the 1400s, women in France and Italy would consume this odorous mix as an oral contraceptive. Actually, the stench of their breath alone might have worked as birth control...

Women in Asia and Greece would chug this concoction as some sort of anti-baby-making potion. Some would even find jobs in an industrial field just to have access to ingredients like tar and coal. Lead consumption does cause infertility, but it's also extremely toxic, so death was a major risk.

EngenderHealth says Canadians used to ground up beaver testes and combine them with moonshine as another form of oral contraception. A shot of whiskey is hard enough to swallow. This? No way in hell.

During the 1800s in Europe, women would insert metal thimbles into their vaginas, which they believed would act as a sort of diaphragm. Monopoly = ruined.

Without any rubbers in the 1600s and 1700s, men—origins unknown—would wear these as condoms. They were somewhat expensive and often washed and reused.

You know how douching isn't good for you? Some people previously believed the fizziness of pop could wash out any sperm left inside. [insert sticky situation pun]

Word on the street is that Italian Giacomo Casanova—a womanizer of sorts—would insert lemon rinds into his sexual partners to prevent pregnancy. Some even believed that the acidity from the fruit could kill sperm. Tip: When life gives you lemons, make lemonade, not an all-natural contraceptive.

You shake a piggy bank to empty out any loose change, so the same logic must be true for shaking sperm out of your vagina, right? The famed Greek Soranus, who's also known for creating the rhythm method—planning intercourse around a woman's cycle—suggested that jumping post-sex would dislodge sperm. He also said sneezing had the same effect, but who can really sneeze on command?

A Colombian woman once left a potato inside her vagina for two weeks until it starting growing roots. Like, into her body. Why? "My mom told me that if I didn't want to get pregnant, I should put a potato up there, and I believed her," the unnamed young woman said. Fortunately, doctors were able to remove it without the need for surgery, but can we just say: SEX EDUCATION FOR EVERYONE.

The teens of Australia used to scarf down candy bars and used the wrapper as makeshift condoms. Like recycling, but scarier.

How Your Body Changes When You Switch BC

Everything You Need to Know About IUDs

11 Things You Need to Tell Your Gyno