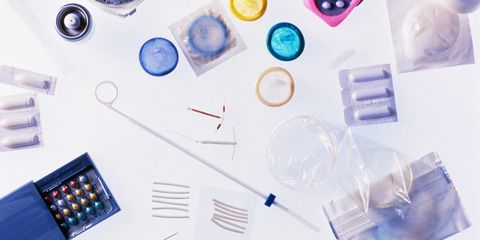 Think of an intrauterine device—more commonly referred to as an IUD—like that new Indian restaurant you heard about, wanted to try, but became skeptical after a few Yelp reviews. We're here to set things straight.

The gist? It's a plastic, T-shaped birth control method that's slowly gaining popularity—more women are using it now than in 2006. And here's what you should know:

There are two types available in the U.S.

The hormonal IUD releases a synthetic form of progestin—a hormone that affects your menstrual cycle, pregnancy, egg fertilization, and ovulation. You can either spring for Mirena or Skyla, which can last for up to five years. The other IUD contains copper and doesn't have hormones. If you go this route, your doctor may recommend ParaGard, which lasts up to 10 years. Some side effects for either option include menstrual pain and bleeding for the first few months.

It's one of the most effective methods of birth control

Between six and 12 women out of 100 women experience an unintended pregnancy while on the Pill. Less than 1 out 100 women with IUDs accidentally get pregnant every year. You do the math.

Insertion can feel a little uncomfortable

Some women don't even notice it goes in—others may feel slight cramping a day after the procedure. Your doctor will recommend some over-the-counter medications to relieve your ailments, but they should subside after a day or so, says Lauren Streicher, M.D., author of Sex Rx-Hormones, Health, and Your Best Sex Ever.

It's possible for an IUD to fall out

Before you go exit out of your screen, STOP. This happens to less than 5 percent of women, so chillax.

You can still get an STD

If you find that an IUD is not your thing, just ring up your gyno and set up an appointment to have it removed. Note: The ability to get pregnant returns faster after an IUD is removed as opposed to going off the Pill, says Streicher.

You have to have a doctor insert it

The IUD has to go way deeper that a tampon does. Do not try at home.

FYI: So uncommon, but it is possible for the shape and size of a woman's uterus to prevent proper IUD insertion.

The FDA just approved a new kind of IUD

And it has such a pretty name! Dubbed Liletta, the hormone IUD releases levonorgestrel, which thins the womb's lining and lasts up to three years. Yay options!

Copper IUDs can be used as emergency contraception

Is Rite Aid out of Plan B? You can substitute it for the copper T stick if it's inserted within five days of unprotected sex. Again, you need a doctor to perform the insertion.

The copper one's effects fire up right away; the hormonal ones are effective right away if they're inserted within seven days after the beginning of your period. Celebrate (sex-lebrate?) good times!

What Has Birth Control Done For You Lately?

California Is Giving You FREE Birth Control Because It's the Law