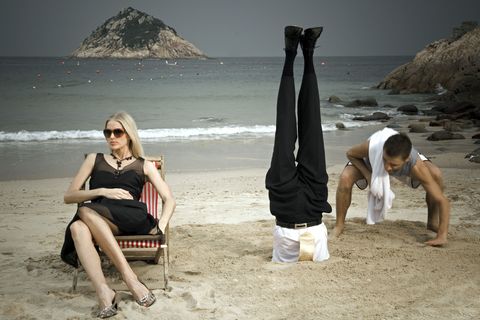 Yoga is an ancient discipline of the mind and body dating back more than 3000 years. But it wasn't until 1947, when a Russian-Swedish actress named Indra Devi brought yoga from India to Hollywood's A-list crowd, that Westerners began to see it as a fitness practice that could help with beauty and health. Today, yoga is a modern phenomenon subject to as many trendy variations as, well, just about anything else. Check out the wackiest styles out there because—who knows? Maybe you're the next nude, harmonica-playing, tantrum-throwing yoga fanatic.

We start every #GanjaYoga class with a basic #awareness #meditation and #yogic #breathingpractice. Then we do some warm-ups, #flow - based #yoga, and #joint rotations (Ha!) ... Next, we'll hold some classic #yoga #postures for all-levels. Just before ending, we have a brief break to #puff again, and then sink into a final #meditation. You can #puff throughout class as you like. The main thing to remember in Every Yoga Class is that you can (and must!) take care of yourself. If something I say doesn't feel right to you, - modify, rest, or do something else. Don't worry about what anyone else is up to, just tap into your self. Can't wait to see you! - Classes are every Monday and Wednesday in #SF - EXCEPT NEXT WEEK! (I'm in #portland !) #themainthingtoremember

If you're wondering if you're capable of burning both marijuana and calories within the same hour, get stoked. With weed legalized in an increasing number of U.S. states, some have embraced it as a tool for deepening the yogi experience. Supporters say it relaxes people, encouraging them to extend themselves physically and mentally beyond the limits of their sober selves. Students at Brazilian Yoga, a weed-friendly studio in L.A., are encouraged to "think of their yoga mats as private magic carpets." But critics argue that it's foolish to use a mind-altering substance for a practice that teaches you to ground yourself in reality. Pick your poison, we guess.

In Sanskrit, the word "yoga" means "to unite." And apparently, some people interpret this as a call to unite humans and horses through yoga. Equine yoga can have you doing downward facing dog on your horse's back or have you doing a simple lunge beside your horse's body. Advanced practitioners can take it to another level: This Argentinian cowboy actually leads his horse through its own series of Zen contortions before launching himself into a headstand on the horse's belly. If you can accomplish that, nobody will question your authority as equal parts horse whisperer and expert yogi.

Imagine someone in the downward dog position. Now imagine them naked. You've done it! You've grasped the concept of naked yoga. It is rooted in the idea that we can connect to ourselves most profoundly by baring it all in a safe space. At first you might feel floppy and vulnerable, but over time you'll get comfortable (literally) in your own skin. Also, it's a funny response to a Montana lawmaker's call to ban yoga pants for being sexually obscene.

This isn't yoga for that one showoff guy who can do a headstand through the entirety of your yoga class. This is yoga for bros: strong, unsentimental, muscular dudes who wouldn't go near a Bikram class. Broga® is actually a trademarked brand founded in 2011 by two guys who wanted to include more men in the yoga community, which is often seen as a space for women. Broga® classes focus more on naturally strong male areas, like the back and arms, and less on flexibility and spirituality. Dudes who feel excluded by the scarcity of masculine yoga gear can shop at brogamats.com, which sells a magnificent mat bag that looks like a burrito.

Any decent yoga teacher will tell you that yoga is all about breathing. David Harp, the musically named founder of Harmonica Yoga, believes that playing the harmonica during your yoga practice can lead to mastery of pranayama, or the art of controlled breathing. It makes you musically mindful of your inhales and exhales, allowing you to focus deeply and increase your physical stamina. Harp says, "when we can control our breathing, we can control our lives." Sounds intense.

Polga marries two core-building workouts, pole fitness and yoga, to create an empowering practice with a title that sounds like a brilliant name for a female pug in Russia. In polga, the pole is a prop just like a mat, strap, or foam block. It allows you to deepen your stretch and balance better during challenging poses. Because you probably haven't meditated enough to achieve levitation, polga is an opportunity to elevate yourself off the ground during your practice.

Do as the children do: scream, cry, stomp. Let it all go. Everyone will think you're a lunatic if you act like this in any other situation, but tantrum yoga is a safe space to whine all you want. Los Angeles-based yoga instructor Hemalayaa started combining yoga, dance, and temper tantrums when she felt that regular yoga was not cathartic enough. "This is an outlet to let it out," Hemalayaa told ABC, "but really it's about joy and freedom and celebration." Bonus: yoga tantrums usually progress into laughter, which is the best release of all.

Animal reactions to yoga run the gamut from anxiety to curiosity to participation. At NYC's cat café Meow Parlour, cats patrol the surroundings while you do yoga. According to a People reporter who attended the class, most of the cats responded with mild bemusement, one plopped down on a student's mat, and another became a literal copycat by joining in the stretch fest. Some people take it to the next level, masterfully involving cats in yogic poses – like this guy, who performs an exquisite "Purrior II" pose. When doing cat yoga, please extend your mindfulness to the cats to avoid kicking or insulting them.

Hey guys, I know many of you are wanting to come to Italy (I got 9 emails in the last 3 hours) but please consider coming to my Ojai, Calif retreat over Labor Day. It's 4 days and it's my fave! But please, sign up soon as my retreats have been selling out fast xxjp Book here or find out more info at jenniferpastiloff.com under retreats. ps, any questions email barbara at jenniferpastiloff dot com Italy is sold out sadly. #manifestationyoga #manifestationretreats #ojai #manifestingallovertheworld #laborday #california #makingshithappen #msh Ps this pic is from this morning while we were rocking it out at #karaokeyoga at @canyonranch. Labor Day in Ojai WILL have karaoke yoga!!!!

If the silence of a conventional yoga class has ever tempted you to break out into a soulful rendition of "Don't Stop Believing," karaoke yoga is for you. Developed by instructor Jennifer Pastiloff at the luxury Equinox gym, karaoke yoga is a singing/dancing/yoga class that helps students express emotions and connect with each other. A big TV screen feeds you the lyrics to popular songs while you sing along and flow through asanas (postures). If you can't find a class near you, just re-enact Janelle Monae's music video for her song "Yoga." You will literally be singing your own instructions.

Scene from the rear view mirror of the green mat during #KaraokeYoga at @jenpastiloff 's Ojai retreat. #beautyhunting #5mostbeautifulthings

Many people do yoga in the pursuit of a "perfect body," an elusive mix of thinness and buff-ness particular to this historical moment. But fat yoga rejects that, re-claiming the word "fat" in an effort to rid the word of its stigma. Students practice poses modified for larger bodies, making yoga accessible to people who feel alienated by the implied size requirements of mainstream classes. Jayvin Jordan-Green, a student at Fat Yoga studio in Portland, Ore., put it this way: "(Most teachers) see me as the 'after' picture, when I don't want to be the 'after' picture."

Day 10 Eka Pada Rajakapotasana/Mermaid Pose for the #CrazyBigInversions July Yoga Challenge with @crazycurvy_yoga and @biggalyoga Sponsors : @fractal.9 @stardancerdesigns @lineagewear @haeskit Coming from a downward dog or tabletop pose. Bring the left knee to the left wrist and left ankle to the right front hip. Drop the hips down to the floor. If you need to prop yourself up use a block or bolster under the left hip to elevate. On the right side bend the knee and grab the foot. Walk the right forarm on the foot to hook the pit part of the elbow. Inhale and bring the left arm up to the sky, and drop it behind the head to grab onto the right hand. Hold for 5-10 breaths and come back out of the pose to switch sides. You can also use a strap to connect the hands together. How to participate: ● Follow hosts @crazycurvy_yoga and @biggalyoga and sponsors @stardancerdesigns @lineagewear @haeskit and @fractal.9 ! ● Check in with us for the daily pose. We will have detailed instructions to get into the pose! ● Post a photo or video of yourself in the daily pose! Make sure you tag #CrazyBigInversions in your post! (Make sure your profile is public) All levels welcomed, please take any variation or modification you are comfortable with! Bikini top by @Forever21 Shorts by @fractal.9 💜 Use the code FRACTAL9PLUS to receive 15% off your order!

Is this really yoga? Probably not. But it is hilarious to watch. Basically, imaginative women like Annelise Hagen, author of "The Yoga Face," decided to repetitively make a bunch of amusing facial expressions and call it a form of yoga. There are, in fact, 42 muscles in your face crying out to be toned, and apparently, various exercises such as puffing out your cheeks will make your face look younger and firmer. But if that's what you're going for, Botox is more efficient.

Advertisement - Continue Reading Below
More From Health & Fitness
One Nurse’s Week on the Coronavirus Frontlines
How to Have Healthy Convos Around Climate Change
Advertisement - Continue Reading Below
How to Build a Mini Gym at Home
Can't Find a Good Online Workout Class? We Gotchu
What It's Like to Be a Doctor Fighting Coronavirus
The Best Workout Apps for Women Who Want Results
LVMH Perfume Factories to Produce Hand Sanitizer
Why Social Distancing Is So Important Right Now
I Tested Positive For the Coronavirus
What Staying Awake for 36 Hours Does to Your Face