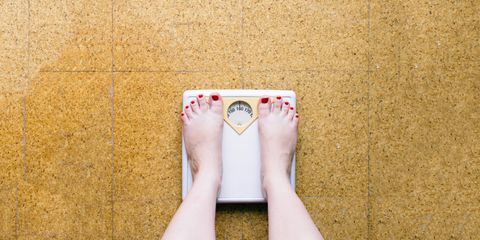 Reem Salameh had always been a chubby kid, but by the time she headed off to her sophomore year of college, she felt she had the Freshman 15 on steroids. She figured her 50-pound weight gain had something to do with being a first-year—never mind that she was living at home, eating as healthily as ever, and avoiding the college party scene. So she did what any responsible young woman would do: She signed up for a gym and worked out five times a week. One year and hundreds of sweat sessions later, the scale still hadn't budged.

It would take five years of exercise, careful eating (she's since become a nutritionist), and dismissive doctors before Salameh, now 24, was diagnosed with lipedema, a little-understood condition in which fat builds up beneath the skin. While conservative estimates show that up to 11 percent of women suffer from lipedema, it's been mostly ignored by the medical community, leaving women feeling baffled and blamed.

"At points, I thought, Should I just give up and accept my weight?" says Salameh, who, at 5'6", was 200 pounds. "It was so frustrating going from doctor to doctor and hearing the same thing: 'Oh, just eat healthy and exercise more.' I remember crying to my mom, like, 'Why is this happening?'"

"It was so frustrating going from doctor to doctor and hearing the same thing: 'Oh, just eat healthy and exercise more.'"

The vast majority of American physicians have never even heard of lipedema, a disease first identified in a 1940 Mayo Clinic report and that today is commonly recognized and treated in Western Europe. But doctors still have little idea what causes it. Lipedema almost exclusively affects women, and it tends to appear during puberty and worsen during pregnancy and menopause, which hints that there's a hormonal component. It often runs in families, which suggests a genetic connection. But understanding exactly what's happening below the skin is surprisingly complicated: Lipedema is characterized by disproportionately large hips and legs (and sometimes arms), with fatty deposits under the skin. As the condition progresses, it essentially deforms the body, piling on pounds that diet and exercise can't touch. Even after bariatric surgery, for example, "The upper body will be thin, almost starved-looking, but with big fatty legs," says Dr. Karen L. Herbst, an endocrinologist and associate professor of medicine at the University of Arizona College of Medicine in Tucson.

A clue that the inability to lose weight could be caused by lipedema is the fat itself, which is a different texture than the soft, squishy flab of, say, love handles. "Lipedema patients often have this fibrotic tissue—firm nodules like marbles or rocks—in their fat," explains Dr. David Amron, a dermatologic surgeon in Beverly Hills who specializes in the disorder. Lipedema fat cells also seem particularly rough on the body's metabolism. We know that all fat cells burn through calories more slowly than muscle tissue does, but lipedema fat, it seems, really stalls calorie burn; the Mayo report, for instance, "showed that resting energy expenditure is lower in women who have lipedema," Herbst notes. And lipedema is a progressive disorder, meaning once it appears, she says, "it starts to pile on."

And it can hurt. "If my cat jumped onto my lap, it felt really bad, like stubbing a toe," recalls Crystal Willis, a 32-year-old from Glendale, California. "Some nights I'd lie in bed with a throbbing, aching pain, almost like a constant shin splint, and I'd just wish I could get rid of my legs."

The medical community has no clear explanation for the pain, but Herbst has her suspicions. "As the fat tissue grows, it may push on the nerves," she says. "Plus, there's lymphatic fluid that should be moving through the tissue, but it's not." Lymphatic fluid contains cell waste material and may become acidic when a person moves around and generates lactic acid, she says, so there could be toxins in the fat tissue damaging nearby nerves. And we know that even in healthy people, fat secretes damaging inflammatory substances. All three abnormalities might contribute to the discomfort.

Another medical pitfall: lymphedema. In women suffering from lipedema, the theory goes, there might be something structurally wrong with the blood vessels that, over time, causes the lymphatics to leak or function poorly. Eventually, it's impossible for the lymphatic system to pump fluid, cell waste, and protein out of tissues, cleaning as it goes. Other problems, like changes in gait (owing to fat growth on inner thighs, lower legs, and ankles), arthritis, and even the need for knee-replacement surgery, are common in lipedema patients, says Herbst.

Lipedema is a progressive disorder, meaning once it appears, she says, "it starts to pile on."

But beyond the physical ramifications, some of the worst symptoms are psychological. After all, doctors can't diagnose, or even explain to patients, what they don't understand. "I myself didn't recognize it as a distinct condition until seven years ago," Amron says, "and I've been specializing in liposuction surgery for 20 years."

There's also a lack of education. "In med school, we're taught to check the heart, lungs, skin, nerves—but what about fat? We have to teach more doctors what the lipedema fat feels like," Herbst says. These exams are not pleasant—the doctor has to pick up folds of flab and feel around. And everyone has to keep talking about fat. "Fat is not sexy, and that stigma is a reason why there are few grants or medical trials," Herbst adds.

Even if a patient gets diagnosed, treatment can be difficult. Exercise, especially swimming and walking, helps keep the lymphatic system moving; compression garments discourage fluid buildup in the lower body; and a plant-rich diet heavy on antioxidants fights inflammation. Some supplements (including selenium and butcher's broom, a plant extract) also seem to improve lymphatic flow. But at the end of the day, lipedema is, by definition, a buildup of fat that lifestyle interventions can't alleviate.

That leaves patients with one expensive but effective treatment: liposuction, which isn't typically covered by insurance. "I operated on two young women in the same day who were both fitness diehards, working out seven times a week and watching their diet," Amron recalls. "They were exercising their tails off, but they still had painful fat and swelling in their calves and ankles. In two hours, we took care of the problem." He's not impartial, of course, but lipedema experts across the globe agree that physically removing the fat can greatly (and possibly permanently) relieve the pain and swelling.

With liposuction, exercise, supplements, an eating plan, and compression wear, Willis lost about 15 liters of volume from her legs over six months. Her pants size went from 22 to 16, and she says she feels lighter on her feet.

Salameh also opted for surgery: "I feel like someone has taken a needle to a balloon and deflated me slowly." She expects to wait a year to see the final results, but her relief is palpable. "I almost feel complete, knowing the disease caused me to feel this way," Salameh says. "The experience taught me to keep fighting for myself."

Do you have lipedema?

Only a doctor well-versed in the condition can say for sure, but the presence of two particular fat pads is a giveaway. "Essentially, 100 percent of the patients I've studied have these fat deposits," says Dr. Karen L. Herbst.

Inner Elbow: Place your arm on a desk, palm up, as if you're about to give blood. Look for a fat mound just inside the elbow fold.

Inner Knee: Straighten your leg and look for a fat pad on the inside of the knee in line with the kneecap.