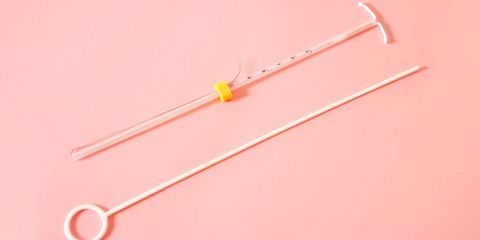 Ah, birth control. One of those things that is oh-so-necessary but can be *such* a pain in the uterus. (Literally.) If we're being completely honest with ourselves, it's something we'd rather not think about—Pregnancy Prevention Autopilot, if you will. And it turns out that with IUDs,  that can actually be the case. Having one means you don't need to worry about contraception for up to ten years (though they don't protect against STDs).

So why aren't more people getting them? In 2013, 16% of American women used the pill, while only 7.2% used contraceptives like the IUD. And while that number is growing, it's not spreading like wildfire as one might think. Our theory? Not enough people know what it's really like to have one. Here, we interview five 20-something women about their experiences with their IUD, in hopes of that some of you may never have to set your daily pill alarm again.

"My boyfriend said that he could feel it during sex."

I got my IUD in May. I first started thinking about getting an IUD because one of my best friends from college got it done a few years about and she loved it. So I read up about IUDs, and after dating my boyfriend for six months I decided to get one. When I went in for my annual check-up, I talked to my doctor about getting it done, and she checked to see if my insurance covered the procedure. Thankfully, it did—so they just did it on the spot. I know.

I chose to go with an IUD *without* hormones, partially because I had been on and off the pill due to skin problems, so for me it was just a safer bet. Also, with hormones your period kind of goes away and that scares me a bit. It was definitely a lot worse pain-wise at the beginning, but I've had the IUD for five months now, and my cramps are fine. They are basically the same as they were before I got my IUD. After I got an IUD, my boyfriend said that he could feel it during sex. I didn't believe him, but I went to the doctor and she said that it wasn't impossible, but it wasn't common either. I got the ends trimmed down, and it was a totally painless procedure.

I think that learning about IUDs, and getting comfortable with the idea is always sort of through friends. I would definitely recommend it and I think that it's a great idea. I feel like in college there were countless amounts of time that I had to think about it—remembering to take your pill, remembering to pack it for a vacation, remembering to set a phone alarm. It's just nice to not have to worry about it.­–Kelsey F.

"I don't know why more people don't have them."

I got my IUD this April, and started thinking about it a few months before I actually got it, because I was too lazy to refill my birth control prescription. I felt different when I wasn't taking the pill and I didn't want to have an altered baseline state. My friend had gotten one and said that it was amazing and released the amount of hormones that one birth control pill releases in a day in month. She recommended a planned parenthood in SoHo, so I made an appointment and went.

With insurance it was $25 and they were super nice and helpful–the woman explained what they were doing every step of the way. The procedure took 15 minutes, and I had slight cramping after but went to work and had a full, regular day. I haven't had any complications with it, except that my bitch-ass friends won't get them too. I don't know why more people don't have them.

One of the things that was most appealing to me what that my period could go away and it has. Honestly, periods have been used to shame women for so long, and I understand the thought behind reclaiming and embracing your period, but for me, they are uncomfortable and expensive. If you can eliminate that from your life why not? A lot of people are hesitant to get an IUD because they used to have a bad reputation, but obviously science has progressed and they are proven to be safe. I couldn't be happier and I can wear white pants whenever.­–Luci B.

"There were many mixed reviews which made me wary."

I first had the thought to get an IUD because my mom had breast cancer. She got it when I was in college, and it wasn't the genetic kind, so she got really into not having hormones and chemicals around. Because she had been on the pill for years and years I thought about doing the IUD that's non-hormonal. At the time, there were many mixed reviews which made me wary, but then a bunch of my friends from college got one and everyone who had them had really good experience except for one person.

I told my gynecologist and she was one hundred percent supportive. Before I got one, she gave me a pap smear—back in the day, IUDs had a bad reputation, because they were saying that if you had an STD when you get one, it can lead to an infection that can make you infertile. After getting the pap smear and being given the green light, it was time to get the IUD inserted.

The procedure definitely hurt but it was a very short amount of time, only the ten actual seconds that it took to put in. Right after I got the IUD I was super paranoid about it and went to the urgent care center. It was so dumb, it just felt weird and I was worried that I was never going to be able to have children, so I figured that I might as well go and check it out. Everything was fine, and I was told that if I had pelvic inflammatory disease, which can lead to infertility, I would be in immense pain and have a high fever, so I would know. (Yeah, I was having a moment.)

Now I only get my period once every three months or so and I lost weight when I went off birth control—around five pounds. My body feels better since I've been on it and I'm less bothered by periods. And honestly, let's be real, going to the pharmacy every month to get birth control is a pain in the ass.–Mary M.

"Not having to worry about taking the pill is fairly liberating."

When I was 22 I became pregnant on birth control, and after I terminated the pregnancy I started to get really anxious about having sex. It started to affect my sex life, so talked to my gyno about a more foolproof birth control plan and we decided that a low-dose hormone IUD would work best for me. Even if I'm taking antibiotics or I'm sick that day (AKA throwing up), it's still going to be effective because it's not an oral contraceptive and the hormones are local.

It took six months for me to decide to actually get it, and my insurance totally covered it because apparently it's less expensive than birth control in the long run. I had the procedure and I won't lie—it was very, very uncomfortable, but I didn't think it was painful. I had a complication in which my IUD partially ejected bit–it only took a quick trip to the gyno and she repositioned it. It was uncomfortable when it was out of place, but apparently that happens sometimes. (I had no idea.) Before, my periods before were like the Red Sea—really terrible and heavy—and now my periods are longer, but much lighter and with less cramping.

I actually first remember hearing about IUD in my junior year of college, in a biology of women class. There was one section that was a serious look at contraceptives and I started to see that modern IUDs were smaller, safer, more effective, and less likely to chance the ebbs and flows of your own biology. I've recommended them to several friends and some of them have heeded my advice, gotten them, and are quite happy with them. For real, not having to worry about taking the pill is fairly liberating.–Pandora T.

"My experience is the worse case scenario."

I got my IUD the summer after my freshman year of college. I read articles about how strongly hormones can change who you are attracted to, and how birth control play a part in that, and my general conclusion from what I read is that I'd rather not mess with my biological cycle and that I'd rather get an IUD. I also had a boyfriend so I didn't want to worry about having condoms all the time. For financial reasons, it also made sense because my insurance covered it, so it seemed like the best option.

It was very painful for me, but in the long run it was so worth it. I drove myself to the appointment, which was a mistake–I totally should have had someone drive, and after the insertion, which hurt really badly, I fainted. No one was in the room, and I felt really nauseous and was in a lot of pain. Unfortunately, the nurses didn't handle it very well and didn't get much recovery time. I hobbled down to my car and lay down for a while because I didn't think that I could drive. Eventually I got home, but I had to get a codeine pill and it was a lifesaver.

That being said, I just went with my cousin to her IUD appointment and she had no pain—just walked straight out of the office—and hasn't had any trouble. There are a variety of experiences and I think that my experience is the worse case scenario, but I still love that I did it and am so happy that I have it. Two of my closets friends from college had it and I think that one you know someone who had done it, you realize that it's the easiest, best, and smartest option. I'm convinced that more people don't have IUDs because birth control companies make a large amount of money from the pill and have no incentive to promote it, so you have to go out and seek them.–Leah F.