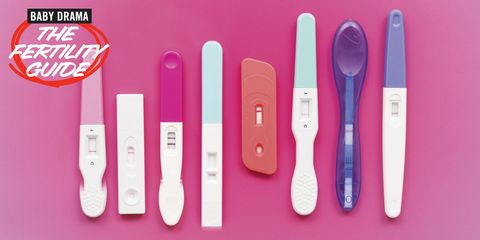 Four years ago, after Danielle Coate, then 35, was named vice president at Bank of America Merrill Lynch, she and her husband began trying to conceive. She quickly found out that it wasn't as easy as she'd hoped. After sticking with her gynecologist's recommendation to "just keep trying" and experiencing two devastating miscarriages, the Denver-based Coate decided to see a fertility doctor. The series of tests he ordered brought bad news: Because of an undiagnosed autoimmune disease, her body was producing the eggs of a 43-year-old.

Coate had never thought to ask either her primary care doctor or her gynecologist about her ovarian health. Her disease worsens with time, so if she'd caught it just a year or two prior, her eggs could have been viable. "If I'd had that knowledge earlier, I would have frozen my eggs," says Coate, now 38. "You try to get pregnant naturally because you don't know any better."

Curious about the prevalence of this lack of awareness among American women, a team of Yale doctors conducted a study, released last year, that revealed three-quarters of women surveyed had never discussed specific fertility and reproductive issues with their health-care providers. Gynecologists routinely cover contraception but rarely, if ever, offer an assessment of their patients' ovarian reserves—the quantity and quality of their eggs. However, 70 percent of the 1,000 respondents to Yale's study said it is important for women to consider their reproductive health "well before they are ready to start trying to conceive."

Now that more women are waiting until later in life to have kids—women older than 35 make up the fastest-growing group of new mothers in the U.S.—doctors are starting to recognize that full reproductive choice should include understanding a woman's childbearing time frame. And it's simple enough to find out: An ultrasound shows the size of the ovaries and the number of resting follicles; if the ovaries are abnormally small and the follicle number is low, a woman's ovarian reserve could be prematurely diminished. Blood tests check hormone levels associated with egg production, including estradiol, a form of estrogen; follicle-stimulating hormone (FSH); and what's called anti-Müllerian hormone (AMH), which gives an overall snapshot of the ovaries' nascent egg supply—lower AMH means fewer in reserve. And while home ovarian-reserve tests are available, they can only check for FSH, not estradiol or AMH.

So why don't doctors routinely offer these tests? Dr. Mary Jane Minkin, clinical professor of obstetrics, gynecology, and reproductive sciences at the Yale School of Medicine (who was not involved in the school's study), says she doesn't raise the issue of ovarian reserves with patients younger than 30, although she regularly does so with her older patients. (The generally accepted age at which fertility begins to decline more rapidly is 35.) For most gynecologists, the lack of communication is due in part to the fact that health insurance doesn't reimburse doctors for spending more time talking to their patients. Another factor is that most plans only cover the tests for women over 35 (the full battery costs about $1,000). Minkin is less concerned with the constraints of insurance, she says. She doesn't discuss fertility with younger women because she doesn't want them to feel pressured to procreate. "Is it fair to tell a woman under 35 that her ovarian reserves are low and put that burden on her?" Minkin says. "My concern is I'm going to drive her away from her career." It's a call she makes without the patient's input, she admits, but she feels justified.

Some physicians believe every woman should at least know that ovarian-reserve screenings are available, like Dr. William Schoolcraft, founder and director of the colorado center for reproductive Medicine, one of the country's top fertility clinics. "Fertility awareness hasn't penetrated ob-gyn practices effectively," he says, "even though this knowledge allows women to plan for the life they want to have."

After three years of research and $40,000 for donor eggs—paid for with credit cards and bank loans—Coate and her husband are now the parents of a baby boy. It's a happy ending to what she describes as a journey "to hell and back," but Coate believes her hardship was unnecessary. She could have frozen her eggs or gone straight to IVF. There's no guarantee either would have worked, but, Coate says, "If someone had said, 'You're not going to have children if you wait,' then I absolutely would have done it."

This article appears in the July issue of Marie Claire, on newsstands now, and is a part of a week-long series on fertility. See the rest here.