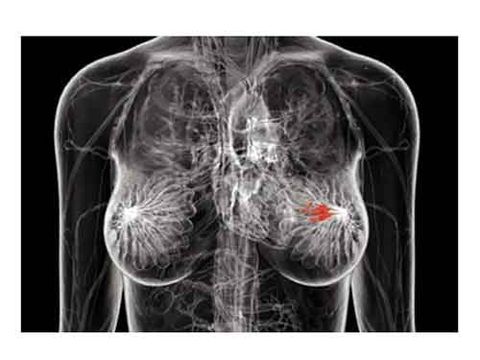 So, you see, surgery to remove the breast tissue would reduce your risk of developing cancer by 90 percent." She drew a wide circle two or three times around the number, written on a notepad now covered with scribbled statistics, and glanced up expectantly. She looked absurdly young. Could she really be a qualified genetic counselor? She wasn't even wearing a white coat. "But," I stammered, dazed and emotional after an hour detailing my entire family history, "what happens if I decide not to take the test?" She gave me a wry smile, and I thought I heard her sigh. "Well," she frowned. "Surely you understand it's cancer we're talking about here?"

As I walked back through the maze of hospital corridors, I felt a familiar indignation welling up. Who the hell was she to lecture me about this disease? I got into my car and, with the motor running, just sat there shaking in the driver's seat, railing at the smug counselor, at my defective genetic heritage, at all the aunts and ancestors who had handed it down to me. And then I began weeping for my mother.

Breast cancer has been the sinister thread running through my life for almost as long as I can remember--at least since I was 6 and my brother, Rory, was 3, when our parents explained that Mommy had found a bad lump and had to have an operation. When I was 12, she finally succumbed. For quite a while after that, the threat would lie dormant until I'd hear about a tragic celebrity struggle with the disease--Linda McCartney, Kylie Minogue--or some girlfriend's fund-raising effort. Every time, my mother's traumatic treatments would flash to mind: the five-inch rectangular burn on her back from experimental radiotherapy, the scar across her shaved head from when they removed her pituitary gland. But soon enough, I'd be back to nurturing the fantasy that breast cancer was something that happened to other people.

Yes, I went regularly for the ritual indignity of a mammogram. I made clumsy attempts to check my breasts after every period and felt I had done my bit for the next 28 days. But then, in 2004, the beast jumped back to center stage. My cousin Sarah, six years younger than I am, found a lump while breast-feeding her new daughter.

It was an aggressive cancer, and the prognosis was not great. Her doctors had also identified a faulty gene--BRCA2--which meant that anyone in Sarah's family, including third-degree relatives like me, was also at risk.

There are a dozen close female cousins on Mom's side of the family, all aged between 38 and 48. At 44, I'm pretty much in the middle. The news put the family grapevine into overdrive: Michèle was definitely taking the test to see if she had the mutation; Jill wouldn't, but would make damn sure her daughters did. Even Chris, proud father of teenage girls, bravely went for a test himself: positive. Me? I couldn't decide. On one hand, I have always presumed I'd inherited some genetic disposition from my mom. On the other, it was possible that I had somehow escaped scotfree: To date, of my eight cousins who have been tested, four are positive and four are negative.Undoubtedly, breast cancer still claims too many victims; it killed my mother, and in a way, I believe it claimed my younger brother, too: Rory, a mama's boy if ever there was one, died 20 years after she did. Officially, it was from a combination of alcohol, anorexia, and HIV. But my dad and I knew

better: It was slow suicide from grief. I hadn't managed to save Rory's life, but was I now being offered a chance to save my own?

Then one day, I was summoned by my cousin Amanda. Serene, doe-eyed Amanda, with the huge, cheerful husband

and the two adorable daughters. She sat me down, opened a large envelope, and handed over some papers.

"BRCA2 Exon 16 sequencing—Analysis indicates heterozygous for familial mutation 7990—7992delATAinsTT. Relatives of Amanda are at risk. Mole cular testing is available to them." I tried my usual spiel: "They keep a close eye on me because of Mom. I'm as aware as I can be. Honest." She wasn't buying it. She was seriously considering a preventive mastectomy. She, too, had lost her mother when she was

little, and she had her girls to consider.

Wouldn't I at least have another think about getting tested?

And that's how I ended up sitting opposite the teenage geneticist for my initial counseling session, discussing relative risk and frighteningly precise percentages. Stubborn I may be, but stupid I'm not. I can do the math. The counselor's preposterous balloons full of big numbers floated around in

my head: If I have the gene, I have as high as an 85-percent chance of getting cancer; if I get my breasts removed, I cut my risk by 90 percent.

She urged me to take the test. I didn't make an appointment, but I did start to type the unthinkable—

"prophylactic mastectomy"—into Google with obsessive frequency. I started to ask myself some tough questions: Would I continue to monitor my risk, take preventive drugs, or would I bite the bullet, take the test, and—if it came back positive for BRCA2—have the guts to go under the knife? That would mean finally addressing the thorny issue of my breasts, after managing to ignore them for 30 years.

They had been an embarrassment since the summer they appeared, as if by magic, on my bony rib cage. They soon became a major hazard for any sports and particularly inconvenient for my fanatical rowing. I was

busty enough that my coveted Armani jacket would never look really chic on me. Maybe losing them would have some benefits? I could get a smaller, perkier pair.What about my husband? I was fairly sure I could sell him on the idea of some sort of enhancement. I had tried more than once to have a serious discussion with him about the implications of a positive test, but for a long time he refused to take me seriously, joking about how much bigger he'd like my breasts to be.

But in a rare serious moment, he pledged his support for whatever decision I might one day make.

The more I looked into prophylactic mastectomies, the more I realized that tissue removal and reconstruction was not just a question of a couple of state-of-the-art implants. This was radical, invasive surgery that might entail using muscle or tissue from my back, thighs, or abdomen. It would almost certainly mean reconstructed nipples. No way was this an easy option for someone like me, a woman who can't even drive past a hospital without hyperventilating. Shuddering, I thought about all my mother had gone through and how hopeless I was at summoning up that kind of courage myself.

Maybe, on some level, I have always known that my breasts were a kind of time bomb. When I was a child, my mom's new, lopsided chest, with its purple ridge of stitches and its puckered circle of skin, had been so unexpected, so unreal, that I couldn't keep the enormity of it all to myself. I was the 7-year-old traitor who let her secret out to a friend, who told her mom, who told my mom that I'd told. I knew I'd let her down. It might have been the permissive 1960s, but back then, nobody proudly exposed their mastectomy scars or their hairless skulls, or wore pink ribbons. I hope she would agree that we've made progress since then. For the millionth time, I wish I could ask her, "What do you think I should do?"

I already know what she would've done. Her mastectomy was only the first of many mortifications. I'm not so brave. Whenever I think about taking that test, I know I will also have to consider surgery, even though it doesn't reduce my cancer risk all the way to zero. But I can't commit, especially since I need to think beyond the mastectomy. An inherited BRCA mutation also gives women a 16 to 60 percent chance of developing ovarian cancer--a disease that often doesn't present itself until it is too late to save your life. But removing the ovaries and fallopian tubes means instant menopause, and I'm still vaguely hoping to get some use out of my eggs.

For the time being, I've chosen to indulge my semi-blissful ignorance. But I am taking better care of myself. I am trying to kick the booze after too many years of enthusiastic self-medication. I do weight-bearing exercise, and I keep up with the latest thinking on soy isoflavones (may lower risk), green tea (its antioxidants may protect against cancer), underarm deodorants (not likely to increase risk), and tamoxifen and raloxifene (drugs that help lower risk in some women, but not without side effects).

And if no baby happens within a couple of years, well, then it's time to seriously explore other options-- including taking the test, and maybe even having the surgery--that might just save my life.When Positive News Isn't

Normal BRCA 1 and 2 genes suppress tumors, but inherited mutations in these genes leave women vulnerable to breast and ovarian cancer. Having the mutation doesn't guarantee cancer, but it does raise your risk. The average risk of breast cancer by age 70 is estimated to be 65 percent for women with the BRCA1 mutation and 45 percent with BRCA2, according to Debbie Saslow, Ph.D., director of breast and gynecologic cancer at the American Cancer Society. Women without the mutation have about a 13 percent lifetime risk. The mutation bumps ovarian cancer risk from 1.7 percent up to a 16 to 60 percent risk, according to the National Cancer Institute. Many women who test positive for the mutation opt for preventive removal of the breasts and/or ovaries (in one study of 208 women with a BRCA mutation, slightly more than half chose these surgeries). There are currently no absolute guidelines on what to do next if you test positive and reject the surgery option.

Since your cancer risk is determined by other issues in addition to heredity--including age, diet and exercise habits, and exposure to possible carcinogens--the health changes to be made and the frequency and type of screening needed are different for everyone. Currently, digital mammograms are proving to be significantly more accurate for pre-menopausal women and those with denser breast tissue. For high risk women, following mammography with ultrasound helps identify up to a third more cancers--many at a far earlier stage. Magnetic-resonance imaging (MRI) is emerging as a promising additional tool. Regular exercise may also reduce risk. And while studies of diet and cancer have had conflicting results, most physicians recommend that you avoid excessive alcohol and reduce the amount of animal fat, including full-fat dairy products, that you eat. Also, eat more fruits and vegetables.

This content is created and maintained by a third party, and imported onto this page to help users provide their email addresses. You may be able to find more information about this and similar content at piano.io
Advertisement - Continue Reading Below
More From Health & Fitness
Fitness Gifts She'll Actually Use All the Time
I'm a Black Woman, Mother, & Breast Cancer Patient
Advertisement - Continue Reading Below
Jenna Dewan’s Post-Baby Abs Are 🔥 In New Pic
What to Know About Your Blood Type and COVID-19
Enduring Breast Cancer in a Covid-19 World
Deciding Between a Lumpectomy or Mastectomy
Everything to Know About COVID-19 vs. the Flu
Do COVID-19 Symptoms Happen in a Certain Order?
Are Contact-Tracing Apps Worth the Privacy Risk?
Your Body, Your Business?