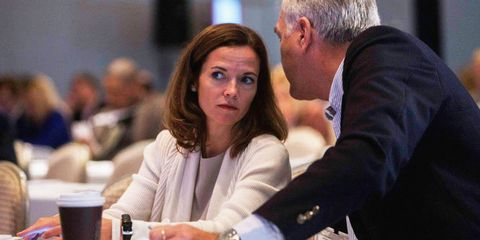 My saga started in July 2013. A friend texted me, asking, "Do you know this guy, Roger Shuler?" I didn't, but quickly learned he was the political blogger behind the website Legal Schnauzer and author of a new post that would forever change my life: "AG Luther Strange Has a Messy Extra-Marital Affair with Ex-Campaign Aide Jessica Garrison."

That was my name in a headline, alleging I had had an affair with my friend and former boss, Alabama Attorney General Luther Strange. (I managed his 2010 campaign.) I was shocked—it was usually the politicians whose names were dragged through the mud, not mine. Honestly, it was so ludicrous that I did something like a proverbial shoulder shrug and tried to move on. And thankfully everyone who knows me knew it wasn't true, including my former boss's wife, Melissa—we wound up in tears on the phone together wondering why someone would make up such horrible things.

By then, I was a Executive Director at RAGA, the Republican Attorney General's Association, in Washington, D.C. My job was to meet with corporations to promote working with Attorney Generals. One day, I went to a meeting with the Government Affairs director at Apple at a restaurant in Cupertino, California. When I arrived, he said, "I looked you up online so I could recognize you." My heart stopped beating. All I could think throughout the meeting was, 'This man thinks I slept with the Attorney General of Alabama.'

I've worked since I was 16, was the President of the Student Government Association in college, and got a job out of law school at a firm where I worked for nine years before starting on Luther's campaign in 2009. Now, it felt like all that hard work was under threat.

The rumors got so out of control that people started asking Luther if they were true. Here he was, running for another term—having to field questions about me.

Had he been at my house? Was he stalking me?

There is no second place in politics—you either win or you lose—and this ridiculous little blog was being used as a tool to try to gain a competitive advantage. I was livid.

Then, it got worse.

Shuler posted photos of my home on his website, which felt like a threat, not to mention a huge violation of privacy. Had he been at my house? Was he stalking me? I installed a home security system and put the police on notice. I was so paranoid that I called the cops in tears one night, convinced someone was outside, and was relieved—and slightly mortified—to learn it was the police doing a drive by.

The final straw was when Shuler wrote a follow-up post claiming my then five-year-old son was actually Luther's illegitimate child. I could handle the professional stuff—I have pretty thick skin—but this crossed a line. It upset his father, my ex-husband, who sent Shuler a comment to set the record straight, which of course he never posted.

I decided I had nothing more to lose—so I rolled up my sleeves and fought back.

When Shuler was served with the papers from my attorney, he was already in jail for another defamation case. (Robert Riley, a lobbyist, sued Shuler for alleging he'd had an affair with lobbyist Liberty Duke.) When we met in court for a preliminary hearing, Shuler came in wearing an orange jumpsuit. He sat directly across from me, but never looked at me. He didn't seem to care that his lies could have destroyed my personal and professional life. I can only assume that his goal was to damage Luther politically, and that he thought using a woman who worked closely with the AG was the best way to do that. He didn't realize that he'd bitten off more than he could chew.

This ridiculous little blog was being used as a tool to try to gain a competitive advantage. I was livid.

When the trial came, Shuler didn't show up. (After five months, he'd gotten out of jail—his wife unpublished the posts about Riley.) Both Luther and I were called to the stand. Seeing Luther responding to questions about the rumors was mortifying. My job had been to help him present a strong front—the exact opposite of making him vulnerable to such scandalous lies. I knew it wasn't my fault, but I couldn't help feeling like I failed him somehow.

One day a month later, I was running late for a meeting with a close colleague when my lawyer called with the news: Not only had I won my case, but the judge had awarded me $3.5 million in damages. I ran into my meeting literally shouting, "I won! I won!" I was elated—not about the money, but about the fact that I'd seen justice done.

I will likely not see a penny from the lawsuit (Shuler doesn't have the means to pay it), but I don't care—all I wanted was for the world to know the truth, which is why I'm sharing my story with you today. This is about more than just me. It's about the women who are bullied, trolled, and victimized online because someone has an agenda, or a chip on their shoulder, or a self-righteous feeling that they simply can.

I wish that's where my story ended. In a way, it is—but another chapter just opened.

The week before last, I got a call from a man who works in Alabama politics. He was upset about rumors swirling around the recent announcement of Governor Robert Bentley's impending divorce. Bentley's wife filed papers in late August, which prompted the same blogger who lied about me to write that the cause was primarily the result of an affair with one of his aides, Rebekah Caldwell Mason.

I had no idea if any of this was true—all I knew was that it brought back all the anxiety, stress, and sadness that had consumed me for months when I was the target of the same man.

I have since learned that Rebekah has retained a lawyer, and while I don't know the details of her case, I do know this: I am proud of her for fighting for her name and reputation. If more women fight back, then maybe, just maybe, people like Shuler will stop seeing us as easy targets—and more as forces better not reckoned with.