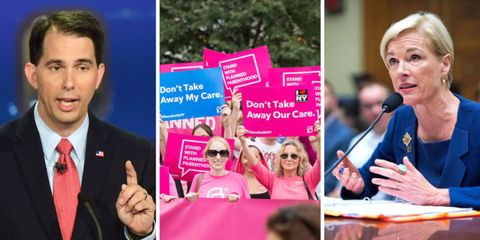 Aggressive restrictions on abortions, led mostly by Republican lawmakers, have been ongoing for the past four years—and 2015 was no different. Though abortion is technically legal in the United States, accessing a safe, legal abortion procedure is becoming harder and harder. These restrictions, called TRAP (targeted regulation of abortion providers) laws, include mandating waiting periods between a consultation and a procedure, which increases the cost of health care for women; banning late-term abortions; and requirements on abortion providers to meet difficult standards that are not seen as medically necessary. It's also getting more dangerous to become an abortion provider in America, as anti-abortion rhetoric is fueling violence and harassment. Forty-two years after Roe v. Wade legalized abortion, young Americans are still split on whether women should keep that right—and their views are even more conservative now than in 1973. Here's a recap of what happened in 2015.

According to the Center for Reproductive Rights, state legislatures enacted 47 new anti-abortion restrictions in 2015. West Virginia and Wisconsin joined the 43 states that have instituted a ban on abortions after a certain point during pregnancy.

Here's a summary of the anti-abortion restrictions passed in 2015, from the New York Times:

Five states enacted or extended waiting periods for abortions, joining the more than two dozen states that already had such laws. Some of these laws also require a woman to undergo in-person counseling, which means two separate trips to a clinic or hospital. Two states, Arizona and Arkansas, passed laws requiring doctors to give women misleading information about the possibility of "reversing" a medication-induced abortion. Arkansas also became the third state to ban the use of the modern, evidence-based drug protocol for medication abortion, which is cheaper and more effective than what the Food and Drug Administration approved in 2000.

The sum effect of these restrictions, Mother Jones's Molly Redden writes, is that women have effectively lost the fight for reproductive rights:

Most abortions today involve some combination of endless wait, interminable journey, military-level coordination, and lots of money. Roe v. Wade was supposed to put an end to women crossing state lines for their abortions. But while reporting this story, I learned of women who drove from Kentucky to New Jersey, or flew from Texas to Washington, DC, because it was the only way they could have the procedure. Even where laws can't quite make it impossible for abortion clinics to stay open — they are closing down at a rate of 1.5 every single week — they can make it exhausting to operate one. In every corner of America, four years of unrelenting assaults on reproductive rights have transformed all facets of giving an abortion or getting one — possibly for good.

In October, California became the first state to take a stand against crisis pregnancy centers, anti-abortion centers that disseminate deceptive and false information about abortions to pregnant women. California Gov. Jerry Brown signed a bill that requires employees at the centers to disclose that they are not medical professionals, and to provide information about public assistance for reproductive health care and services. The law may serve as an example of what other states can do to tackle these faux-clinics, which Cosmopolitan.com reported outnumber abortion clinics 3 to 1.

The abortion debate intensified over the summer, after a pro-life group known as the Center for Medical Progress released a series of highly edited secret recordings of Planned Parenthood executives discussing fetal tissue procurement and donation. The videos alleged that Planned Parenthood was profiting off the sale of aborted fetal tissue (which is illegal, and also untrue.)

This month, both the House and the Senate voted to defund Planned Parenthood. Planned Parenthood was spared in a recent spending bill, however, after Democrats were unwilling to drop funding during negotiations.

Planned Parenthood is one the nation's leading providers of affordable health care to American women. The Congressional Budget Office analyzed the effects of defunding the organization and found that more than half a million low-income and rural women who have no other access to reproductive health care would bear the brunt of the blow. These women rely on Planned Parenthood for contraception counseling, cervical and breast cancer screenings, STI testing and education, pregnancy and pre-natal services and counseling, and more.

Despite this, GOP lawmakers have attempted to block federal funding of the organization. Sen. Elizabeth Warren delivered a passionate speech excoriating her right-wing colleagues:

I come to the Senate floor today to ask my Republican colleagues a question: Do you have any idea what year it is? Did you fall down, hit your head, and think you woke up in the 1950s? Or the 1890s? Should we call for a doctor? Because I simply cannot believe that in the year 2015, the United States Senate would be spending its time trying to defund women's health-care centers.

Pope Francis, celebrated as the most progressive pope for his views on gay marriage and climate change, announced in September that during the following "Year of Mercy" that ends next November, priests have "the discretion to absolve of the sin of abortion those who have procured it and who, with contrite heart, seek forgiveness for it."

While many Catholics lauded the decision, it was criticized by women's rights activists as perpetuating the stigma against abortion. As Jill Filipovic wrote in an op-ed for the New York Times, "The threat of excommunication, at the very least, makes the church's views on women's rights clear. Offering forgiveness is a softer version of the same judgment: that the millions of women around the world who have abortions every year are sinners. Inviting women to feel shame and guilt for their abortions isn't a mercy; it's cruelty."

Activists in America took note of how Australian authorities responded to Troy Newman, an anti-abortion activist from America who has said that abortion providers should be executed, and women and men who consent to abortion should be charged with murder. Newman was scheduled to speak on a tour in Australia but was barred from entering the country over fear that his speech would incite violence against women. Australian politician Terri Butler said of Newman's detention, "That type of extremism might fly in the U.S., but not here in Australia."

Amelia Bonow and Lindy West started #ShoutYourAbortion to encourage women to speak up about abortions, an increasingly stigmatized subject. Bonow was even sent death threats and had to go into hiding for daring to talk about her procedure. The hashtag showed how dangerous and extreme the anti-abortion sentiment has gotten in America; it has become unsafe for a woman to receive an abortion—not because of the procedure itself, but because of the culture and stigma around it.

It's a very small move forward for the abortion debate, but for millions of women, a significant one: TV shows like Jane the Virgin, Jessica Jones, Scandal, and Girls portrayed women getting abortions or talking about abortions in realistic terms that tackled the subject head on. Gretchen Sisson, a University of California, San Francisco researcher who studies portrayal of abortion in pop culture, told ThinkProgress: "We're seeing more abortions treated as matter-of-fact and unapologetic. We're not seeing a lot of the agonizing decision making that we would have seen even five years ago." She added, "Abortion is being shown as little more like just another part of women's reproductive lives."

On Nov. 27, a gunman opened fire at a Planned Parenthood facility in Colorado Springs, killing three people and wounding nine. Activists and pro-choice advocates said the attack was fueled by extreme anti-abortion political rhetoric. At trial, the suspected shooter, Robert Lewis Dear, reportedly yelled, "I am a warrior for the babies."

11. The Supreme Court Will Weigh in on the Abortion Debate

The Supreme Court will again wade into the abortion debate, and its ruling will undoubtedly have an impact on the lives of millions of American women and their families. The case is centered on the constitutionality of restrictions Texas lawmakers have placed on abortion providers that make it difficult for most providers to stay open.

The prohibitive legislation requires abortion providers to have admitting privileges at local hospitals, which are hard to obtain because, according to NPR, "the complication rate from abortions is so minuscule, most abortion providers cannot meet the minimum number of admittances that hospitals require before granting privileges." The law also requires that abortion clinics meet the same facility standards as outpatient surgical centers. These laws apply even to doctors who conduct medically induced abortions—simply prescribing a woman some pills—effectively making it impossible for many providers to operate.

The Supreme Court's decision will decide to what extent Texas—and by extension, other states that are hostile to abortion—can successfully restrict a woman's access to a safe and legal abortion.