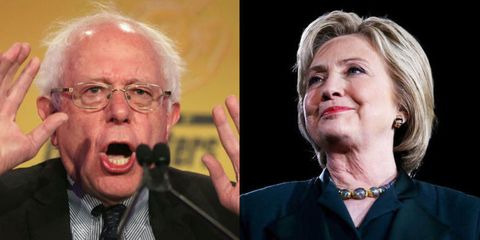 The 2008 primary was the first major election I was eligible to vote in, and I remember weighing Hillary Clinton's strong plan for universal healthcare against her vote for the war in Iraq. I also recall my stepdad making fun of her "cankles," endless media analysis of her pantsuits, and a prominent talk radio show host devoting an entire segment to the question, "Does this country want to actually watch a woman get older before their eyes on a daily basis?"

Sexism in the 2016 election is more subtle, but no less present. The talk about Clinton's physical appearance has been replaced with ad nauseam questioning of her likability and trustworthiness. But what makes this sexist pill harder to swallow is that the person giving her a serious run for her money is unapproachable, unaccommodating, and unkempt: Bernie Sanders.

Just imagine a slouching 74-year-old woman with disheveled hair and a curmudgeonly way of shouting when she talks—and even wagging her finger at the people she's talking to. Forget her chances of being a viable presidential candidate—she would be dragged through the mud by the press. Has there ever been such a woman in serious political power in this country? Could there ever be?

"Clinton is required to look elegant but not be attractive, have substantial experience but not be too old, and communicate effectively without raising her voice."

As a female politician, Hillary Clinton is required to look elegant but not be attractive, have substantial experience but not be too old, and communicate effectively and inspirationally—without raising her voice. And meeting these requirements has very real implications for her success. Ahead of the Nevada caucus last week, Clinton's age was the third most searched question on Google trends (there was no such search for Sanders, six years her senior).

But beyond the obvious gender norms of appearances and aging, Sanders's unlikely success has revealed a disturbing double standard of what we want to hear from women candidates—and the boundaries of rhetoric and messaging they must work within to be able to compete for political office.

We saw it in the first Democratic debate in October, when Sanders said that "all the shouting in the world" would not fix our gun problems, to which Clinton later commented, "Sometimes when a woman speaks out, some people think it's shouting." The irony of this exchange is not just that Sanders was accusing someone else of shouting (though to his credit, he's got that silent finger wag interrupting on lock). It's also the substance of it: Gun control is an issue that Sanders has a mixed record on, and he has not outlined a plan to address gun violence as Clinton has. So Sanders not only gets a pass with shouting his points, but also with not having a plan to back them up. A woman candidate could do neither.

How Sanders plans to achieve many of his proposed radical policies (such as free college tuition by taxing Wall Street) in a gridlocked Congress is unclear. In 25 years in Congress, he has been the primary sponsor of only three bills that were successfully signed into law, two of which were about renaming post offices in Vermont. He's essentially running on a platform of not aiming to please—or even to explain—and it's working.

Clinton, in contrast, has not only put forth comprehensive policy plans, but maintained her composure during excruciating levels of investigation about her tenure as Secretary of State, most recently in an 11-hour marathon Congressional hearing on Benghazi that came off more like a witch hunt than a legitimate exercise in justice. She has also had to work through her husband's legacy, both politically and personally: from explaining her support of policies like welfare reform to answering accusations of his sexual misconduct.

"He's essentially running on a platform of not aiming to please—or even to explain—and it's working."

As a 74-year-old Socialist candidate once thought to be completely unelectable becomes competitive in the Democratic primary, we are constantly reminded that even though she is imminently qualified for the job, Clinton's foothold in this world is tenuous. One wrong comment could undo her. Unlike Sanders, she's forced to walk a very high tight rope.

Clinton is the only woman who has ever had a real shot to win the White House—and she is held to a standard of excellence unlike anyone else in this race. But her near-gaffeless performance on the campaign trail seems to have only increased her likability problem (look no further than the Sanders vs. Clinton "compare them on the issues that matter" meme, which proposes that Sanders is more relatable on virtually any topic than Clinton).

In last Sunday's episode of the almost-real-time documentary series The Circus, Sanders gave a long, rambling answer so far from the question he was asked that the journalist had to reiterate, "I understand that that was a compelling description of what's been happening to you, but what do you fear [going forward]?"