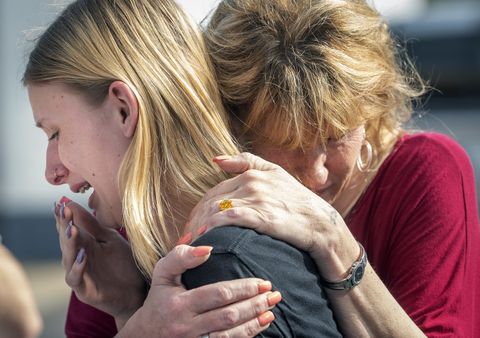 Just moments after the tragedy, teens from the school began talking with news outlets about the terrifying experience. Here are the firsthand accounts of the mass shooting, in the Sante Fe High students' own words.

"I was thinking it was going to happen eventually, it's happening everywhere."

"I was in the theater room, [from down the art hall] I heard 4, maybe 5 shots. I didn't know what they were at first, but then I started hearing screaming. I ran, and we hid backstage in the workshop until they found us and escorted us out...I was thinking it was going to happen eventually, it's been happening everywhere. I was ready to run." — Paige Curry, via KPRC

"You could smell the gunpowder."

"You could smell the gunpowder that came from the gun. We were all scared because it was near us. I was very, very scared but I managed to keep calm, especially with my mom on the phone," — Liberty Wheeler, 14, via The Houston Chronicle.

"It was just a normal-like class day. We all were doing our work in first period. And then all of a sudden, like, it's a fire drill...So we followed the fire drill procedures. And then we went outside. Like we were all standing there, but not even five minutes later, we all start hearing gunshots." — Angelica Martinez, 14 via CNN

"I saw a kid walking down the hall and he looked suspicious. He said he had a gun or something...then he pulled the fire alarm and so we all went outside, and then we heard three shots. I ran towards the trees, because I didn't want to be in sight of whoever was shooting. I heard four more shots and then I ran to the car wash." — Tyler Turner, via Fox News

"The world, I just don't like what it's becoming."

"I shouldn't be going through this. It's my school. This is my daily life. I shouldn't have to feel like that."

"The world, I just don't like what it's becoming. Every school shooting, kids getting killed, innocent kids getting killed. No family should have to suffer that just because somebody wants to be selfish and go out and hurt other people. It's just not right at all." — Dakota Shrader, via Fox News and The Houston Chronicle

"I'm saying scary a lot, because it was."

“We didn’t know what was going on...It was terrifying. It was scary. I’m saying scary a lot, because it was. There were kids out there running, and he could have probably picked us off, but he didn’t. it was just a scary thing that happened.” — Logan Roberts, 18, via The New York Times

Eileen Reslen I’m Eileen, the digital news reporter at Hearst Digital Media.
Advertisement - Continue Reading Below
More From Politics
It’s Almost Super Tuesday. Here’s How to Prepare
Hope Is Roe's Last Chance
Advertisement - Continue Reading Below
Is Any Republican Running Against President Trump?
Get to Know CBS News Anchor Norah O'Donnell
Everything We Know About Senator Warren's Husband
Mayor Pete's Husband Would Be a "First Gentleman"
How a Parkland Mom Turned Her Grief into Action
He Voted for Trump. She Voted for Bernie.
How Guerrilla Feminists Are Fighting Femicide
Who Was Mayor Pete's Father, Joseph Buttigieg?