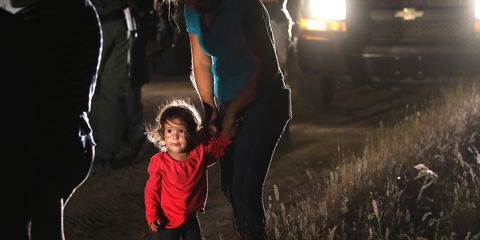 One of the children shouts: “Papá, Papá, ay, no, Papá.” As consular workers speak, and other children ask for mothers and family members, the cry persists in the background, “Papá, Papá, Papá,” punctuated with sobs.

The audio obtained by ProPublica of 10 inconsolable Central American children desperately crying out for the parents they have been forcibly separated from at the U.S. border has been played all around the country, and by now, the world.

But some haven’t been able to bring themselves to listen to the grueling seven minutes.

I’ve talked to people who are calling their congressional representatives, canvassing the streets, reporting diligently on the atrocities on the border. But still, they can’t bring themselves to hit play.

Is it selfish to avoid this audio? Do we need to hear exactly what is happening in order to understand the ramifications of this brutal policy?

Psychologist Dana L. Sinopoli, Psy.D said that while she can identify with how hard it is to process the recording, it is crucial we stay engaged by paying attention to the stories coming from the border — even those that are the most difficult to see and listen to.

“It’s a bit like not going to a Holocaust museum or the new slavery museum in Alabama,” she tells me. “We need to bear witness to both the best parts of humanity and to the worst parts of humanity, and that is not always an easy thing to do, but we have to recognize the full continuum of what humans are capable of doing to one another.”

The former president of the American Psychoanalytic Association, Mark D. Smaller, says he listened to the audio several times last night. Though he’s a professional, the experience was “almost unbearable,” he says.

Smaller, who has spoken out against the Trump administration’s policy, explains that the listener “immediately senses and experiences the kind of helplessness that these children are experiencing.”

He describes helplessness as “the worst of all possible human feelings”—worse than anger, loss or sadness.

It’s a bit like not going to a Holocaust museum or the new slavery museum in Alabama.

Depending on your own personal experiences, Smaller says you can “feel slightly traumatized by it,” especially if you’ve experienced a similar trauma or separation anxiety. But still, he thinks it is important for people to engage with the news in order to “understand the depth of how inhumane” this policy is to children.

Sinopoli said she feels like we are “barraged more than ever before,” with so much news that “it’s not only hard to keep up with, it’s hard to want to keep up with.” A recent Pew poll found that most Americans agree, seven out of 10 people “feel worn out by the amount of news” there is.

As a result, people can start dissociating from the tragedies in the headlines, even while looking at an image as heartbreaking as the one of the 2-year-old girl sobbing as the border agents detain her mother.

A 2-year-old girl and her mother are stopped by US Border Patrol.
Getty Images

“There is a self-protective, self-preservative quality about reading the news and having the emotional center of our brain not fully engaged,” says Sinopoli, “But it means we are not actually empathizing or experiencing this on an emotional level.”

Both Smaller and Sinopoli stress the importance of self-care, particularly for individuals who are recovering from similar trauma. This can include taking breaks, going for a walk or doing yoga. But it can also include taking action.

“Write letters to the editor, write your congressman, organize a protest,” says Smaller.

Sinopoli adds: “It’s so easy to feel crazy. I think this is when we need to stay connected to other people who feel as strongly as we do.”

This is the scene in the movie where even though you want to fall asleep in the snowdrift, you need to get up and walk around. If you decide to stop swimming and just drift for a while, you’re apt to wake up in a land you don’t recognize. Because “going numb” is the gateway drug to acceptance.

And, most importantly, the kids in the tapes don’t have the option of tuning it out. There have been recent studies about the harmful, life-long effect the stress of family separation can have on the brain.

”The younger the child, the worse it is,” says Smaller of the longterm effects. “The world has suddenly become very unpredictable” to the child and even if they are reunited with their parents they could worry they will be separated from them again at any moment.

Sinopoli says: “Regardless of reunification, regardless if the policy were to stop tomorrow, none of this undoes the trauma of being forcibly ripped from their parents.”