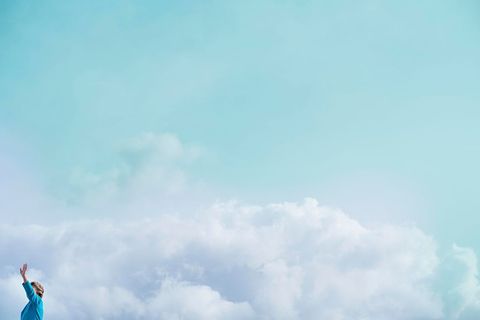 On Tuesday I voted with my daughter. She is only five, but together we cast a ballot for Hillary Clinton. I was so proud to have her help me vote not just for a woman, but for the most qualified candidate in the race. I've always told my daughter she could be anything and for one day, I was telling the truth. And for myself, as a woman who was once a little girl with dreams of becoming the president, the world—for a moment—felt limitless.

I was able to achieve this moment of near-euphoria despite that the fight for America's first female president has been entrenched in opposition. People I know on Facebook share memes with Clinton's face in a target and call her "Killary." And it's not just one side against another; during the Iowa caucuses, a man, a Bernie Sanders supporter, screamed at me and spit in my face. "How," he asked, "could you support that criminal?"

"The glass ceiling may not be broken, but dangerous shards surround us."

This election has always been about women. From Donald Trump's first comments about Mexican men being rapists, which acted like a dog whistle to our misplaced fears about what threatens women, to Tuesday, when Trump won among white, non-college educated women by 62 percent, and among college-educated white women by 45 percent.

So the glass ceiling may not be broken, but dangerous shards surround us. Clinton's loss reveals how deeply broken America is. The sexism and raging xenophobia revealed by the election of 2016 sets a tenuous foundation for the next four years. If this election cycle has proved anything, it's that we are woefully unprepared for our first female president—and perhaps that's why we needed her the most.

Women, exhausted and grabbed by the pussy once too often, are ready for our first female president. But our country isn't. The warnings were everywhere.

I was told, by coffee shop baristas and family members, that Clinton should go to jail. Photos from Trump rallies show angry men and women wearing buttons that declare Trump that bitch while chanting, "Lock her up!" Yet, this misogyny isn't new.

I remember in the early 90s hearing my father and other men from our church gleefully calling Hillary Clinton "ugly." Such sexism was commonplace. But it wasn't overtly embraced by politicians on the campaign trail until this year, when Donald Trump laid bare the cloaked misogyny of our modern era.

You know the rundown by heart now just as well as I do: numerous sexual assault claims, Trump calling women fat and ugly, bragging about grabbing them by the pussy, muttering "such a nasty woman." With little encouragement, his supporters and campaign surrogates followed their man's lead, minimizing sexual assault as "locker room banter."

"This is how misogyny works: It eats at the foundations of who you are until you find yourself a mother of two wondering if you, too, have become fat like Alicia Machado."

Upping the ante of misogyny, Trump has also revealed sexism deep within branches of the government. In the weeks before the election, a conspiracy of men worked to bring down one woman: FBI director James Comey, in an unprecedented move, sent a letter stating that Clinton was being reinvestigated over her emails. This was seen as an attempt todirectly influence the election. Fox News's Bret Baier falsely reported a possible indictment over anFBI investigation into the Clinton Foundation. And Rudy Giulianirevealed that the FBI leaked information to the Trump campaign about Clinton.

And all the while, women have been watching and identifying, however, subtly, in what they see. A good friend of mine, a brilliant lawyer, said it best when she observed, "Little girls believe they can be anything. They don't need Hillary Clinton. It's us adult women who need her, because we don't believe—we've had our limits beaten into us since the moment we left college."

That woman is undoubtedly me. I remember when I gave up on my dream of being president. I was 21, sitting in a quiet room, taking the GRE. The day before, I'd learned that one of my sisters had been sexually assaulted. I cried through the whole test.

My plan had been to take the LSATs, go to law school, then run for office. I had been planning it since I was 13. That year, my parents let me stay up late and watch the election, a rare occurrence for our screen-free household. I saw Bill Clinton beat Bob Dole. I asked my father why there were no women presidents. "No one has been good enough," he said.

I took his words as a challenge. It would be me, I thought. I would be the first. I would be good enough, smart enough.

But years later, as my tears blurred the logic questions on the GRE, I thought, This is too much.

The easier thing was just to slink away—something I thought I would never do. I was "good." I was smart. I got almost perfect grades. I didn't drink until I was 21. I was a member of Phi Beta Kappa. I once asked an underage student to leave a party, because I didn't want to get in trouble. But this came at a cost. My senior year of college, I was tired and worn thin from walking the tightrope of perfection—and that's exactly what broke me and what's been expected to break our female president hopeful.

"We expect a great deal from a female candidate for president. It's called perfection. The slightest stumble is magnified 10-fold. Compare Clinton's e-mail carelessness with any of Trump's deliberate false activities with Trump University, his bankruptcies, and the complaints from his vendors who still are waiting to be paid," writes Madeleine May Kunin inBoston Globe. "Some voters are incredibly forgiving of male politicians' mistakes. 'Boys will be boys,' but girls must be goddesses."

"It's the family member who once whispered to me that all women have been assaulted, but the good ones don't whine about it."

And I was that "goddess"—perfect and careful, always doing the "right" thing, until the day I couldn't. How could a woman do all she had to do and put up with all the world threw at her? I wondered.

So I never took the LSATs. I never applied for law school. I married the first good man I met. I moved to Iowa and wondered what had happened to the strong woman I set out to be.

This is how misogyny works: It eats at the foundations of who you are until you find yourself, 33, a mother of two, constantly stepping on the scale, wondering if you, too, have become fat like Alicia Machado—trying to laugh away the compulsion, while also crash dieting. It's me as a little girl listening to my father talk about how "ugly" Hillary Clinton is. And it's me, walking into the bathroom examining my face, hoping I'm not that ugly, too. It's a pastor refusing to meet with me alone. It's the emails I get from people telling me they liked me a lot better when I just wrote about being a mom. It's the liberal men in my neighborhood asking me what my husband thinks of my writing. It's friends and family who gaslight my sister, suggesting that maybe she had been compliant in her assault. Or maybe, they told her, it wasn't as bad as she had thought. It's the family member who once whispered to me that all women have been assaulted, but the good ones don't whine about it.

"I wonder at the people who stared at the face of pure misogyny and voted for it anyway."

It's always been there—in men, too but in women, who need to survive. It has always been with us, but it took Donald Trump to present it so starkly before us. To remind us that misogyny has been there all along.

And yet, even as we stared at this neon orange misogyny straight on, so many people explained it away.

In the face of Clinton's loss, it's easy to speculate how this election would have played out if we'd had a "better" female candidate. Someone who wasn't so awash in the ugliness of politics. Someone more "likable," someone without whatever it is that makes people turn up their noses. But the truth is, Clinton carries the burden that we gave her—the one we demanded of her. It's the double bind of all women, who are required to be perfect and work like dogs. Required to compromise and work endlessly and wake up fresh-faced and energetic.

It says everything that we can forgive Trump for speaking the sexism, but we can't forgive Clinton for living it.

What this election shows us is that misogyny and racism are, in fact, thriving. A monster was revealed—and elected. If I wanted to show my daughter proof positive of a better world, it has to start now with me teaching her that we cannot give up on our own agendas, even when it is hard—especially when it is hard.

Last night, my sister called me sobbing. She was so tired, she told me, she was so tired of always fighting. "This is how it always goes for us," she said. I told her I loved her. I told her to get sleep and take care of herself, because in the morning I was going to fight for her.

Lyz Lenz Lyz Lenz is the author of Godland and Belabored.
This content is created and maintained by a third party, and imported onto this page to help users provide their email addresses. You may be able to find more information about this and similar content at piano.io
Advertisement - Continue Reading Below
More From Politics
How to Demand Justice for Adam Toledo
Daunte Wright's Death Sparks Protest in Minnesota
Advertisement - Continue Reading Below
41 Surprising Rules First Ladies Have to Follow
Asian American Women on Where to Go From Here
Syrian Journalists Reflect on a Decade of War
How to Show Your Support for the AAPI Community
Activist Lydia X. Z. Brown on Disability Justice
Elisa Crespo: "I'm Not Here to Make History"
What We Know About the Georgia Spa Shootings
Dianne Morales Has Never Listened to the Naysayers