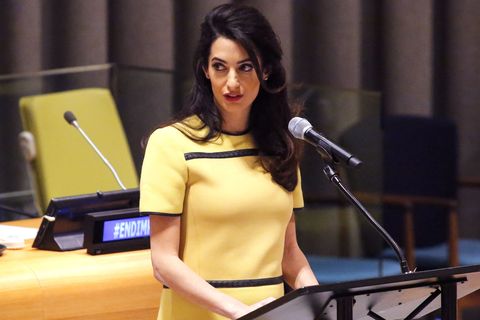 Real-life hero Amal Clooney has made a passionate plea to the UN to stop allowing ISIS to "get away with genocide."

In a UN meeting this week, the human-rights lawyer said that the extremist group must be held accountable for mass murder and rape. Clooney represents Nadia Murad, who—after being kidnapped by ISIS in 2014—was repeatedly sexually assaulted and abused. Murad escaped and is now a goodwill ambassador for the UN Office on Drugs and Crime for the Dignity of Survivors of Human Trafficking.

"Justice is what the victims want," Clooney said, "but justice will be forever out of reach if we allow the evidence to disappear, if mass graves are not protected, if medical evidence is lost, if witnesses can no longer be traced."

"Justice is what the victims want."

"Killing ISIS on the battlefield is not enough," she added. "We must kill the idea behind ISIS by exposing the brutality and bringing individual criminals to justice," Clooney demanded.

Six months ago, Clooney made a similar call for justice asking the UN and Iraqi Prime Minister Haider al-Abadi to investigate the crimes, but so far both parties have remained "passive."

"Instead, mass graves in Iraq lie unprotected and un-exhumed, witnesses are fleeing and not one ISIS militant has faced trial for international crimes anywhere in the world," said Clooney.

Murad, who has been waiting a year for a UN response, asked for their crimes to be investigated so that the survivors are "able to at least bury our dead."

"Why it is taking so long? I cannot understand why you are letting ISIS get away with it, or what more you need to hear before you will act," Murad said, her voice cracking. "So today, I ask the Iraqi government and the UN to establish an investigation and give all the victims of Isis the justice they deserve." 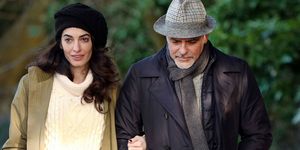 Clooney wants the Iraqi PM to send a letter to the UN Security Council so that an investigation into the crimes can be voted on. If the letter doesn't appear then the UN can act without Iraq's consent and refer ISIS to the International Criminal Court.

Ella Alexander Ella Alexander is Harper’s Bazaar's Deputy Digital Editor.
This content is created and maintained by a third party, and imported onto this page to help users provide their email addresses. You may be able to find more information about this and similar content at piano.io
Advertisement - Continue Reading Below
More From Politics
RBG Is the First Woman to Lie In State In Capitol
Where Senators Stand on Replacing RBG in 2020
Advertisement - Continue Reading Below
Jot Down These 2020 Voter Registration Deadlines
In Honor of RBG, Nine Women Reflect on Her Legacy
What I Learned Working on Garland's Confirmation
Ruth Bader Ginsburg's Most Iconic Quotes
RBG's Deathbed Wish Was a Message for Trump
Can a SCOTUS Justice Be Replaced in 2020?
The World Reacts to Ruth Bader Ginsburg's Death
Ruth Bader Ginsburg—Woman, Justice, Icon—Has Died