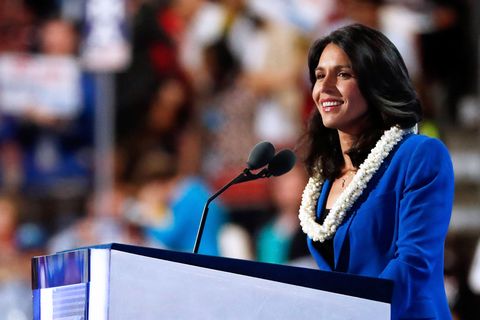 The field of presidential candidates for 2020 is starting to take shape. On January 11, Rep. Tulsi Gabbard of Hawaii officially threw her name into the ring when she announced her plan to run for the top office in 2020, CNN reports.

During an interview slated to air at 7 p.m. Saturday on CNN's The Van Jones Show, Gabbard said:

"I have decided to run and will be making a formal announcement within the next week. There are a lot of reasons for me to make this decision. There are a lot of challenges that are facing the American people that I'm concerned about and that I want to help solve."

Here's what you need to know about Gabbard as she gears up for her presidential run in the Democratic primaries.

1. She was born in American Samoa.

Gabbard, who is only 37 years old, was born in Leloaloa, American Samoa in 1981 and moved to Hawaii when she was two.

2. Her Congressional election made history in multiple ways.

If elected, Gabbard would be the first woman to become president of the United States. It's a big challenge, but one Gabbard, who is no stranger to blazing trails and making history, is more than up for facing. When she was elected to Congress in 2012 (and then sworn in in 2013), she became both the first American Samoan and the first Hindu elected as a congressional representative in the United States.

In 2004, Gabbard joined the Hawaii Army National Guard. She served in a combat zone field medical unit in Iraq from 2004 to 2005 before being deployed to Kuwait for a time. She returned from duty in Iraq in 2006 and began working as an aide for Hawaii Senator Daniel Akaka in Washington, DC, but continued her involvement with the National Guard.

While working as an aide on Capitol Hill, Gabbard enrolled in Officer Candidate School at the Alabama Military Academy and once again made history when she graduated as the first woman in the school's history to be selected as the distinguished honor graduate.

4. She served in Hawaii's state House of Representatives before taking her platform national.

Before she served in the armed forces, Gabbard was a member of the Hawaii House of Representatives from 2002 until 2004. She was elected to Hawaii's state legislature when she was just 21 years old, making her the youngest woman ever elected to a state legislature in the U.S.

She initially filed for reelection in 2004, but ultimate chose not to campaign for the seat after she decided to enlist in the

5. She currently serves on the House Foreign Affairs Committee.

During her time in Congress, Gabbard has supported anti-interventionist foreign policy positions, CNN reports. In 2017, she was criticized for meeting with Syrian dictator Bashar Al-Assad.

"Initially, I hadn't planned on meeting him," Gabbard told CNN's Jake Tapper in January 2017. "When the opportunity arose to meet with him, I did so because I felt it's important that if we profess to truly care about the Syrian people, about their suffering, then we've got to be able to meet with anyone that we need to if there is a possibility that we could achieve peace, and that's exactly what we talked about."

Gabbard previously served as a Vice Chair of the Democratic National Committee, but resigned in 2016 in order to formally endorse Bernie Sanders during his presidential run.

7. She's known as an environmentalist and a proponent of women's reproductive rights.

When Gabbard ran for office in 2012, she was endorsed by the Sierra Club thanks to her strong stance for environmentalism.

In her own 2011 platform, Gabbard described her stance on reproductive rights as follows:

"A woman's decision to end her pregnancy is one of the most fundamental, difficult, and soul-searching decisions in her life. I do not want government to have the power to force a woman to go through with a pregnancy or punish her if she does not. I will oppose all efforts to repeal Roe v. Wade or undermine our reproductive freedom.

A woman's pregnancy is inseparable from her own body, her own self. We must not allow government to control such an intimately personal, inseparable element of our lives. To give government the power to make such personal decisions for us is to give up the freedom to control our own lives."

In the same interview for The Van Jones Show in which she announced her intention to run for office, Gabbard also shared the issues she considers key to her platform: health care access, criminal justice reform, and climate change.

"There is one main issue that is central to the rest, and that is the issue of war and peace," Gabbard added during the interview. "I look forward to being able to get into this and to talk about it in depth when we make our announcement."

Kayleigh Roberts Contributor Kayleigh Roberts is the weekend editor at Marie Claire, covering celebrity and entertainment news, from actual royals like Kate Middleton and Meghan Markle to Hollywood royalty, like Katie Holmes and Chrissy Teigen.
This content is created and maintained by a third party, and imported onto this page to help users provide their email addresses. You may be able to find more information about this and similar content at piano.io
Advertisement - Continue Reading Below
More From Politics
How to Help Black Lives Matter If You Can't Donate
Does Your State Have a Tampon Tax?
Advertisement - Continue Reading Below
What's Ranked-Choice Voting? Allow Us to Explain
Paid Leave for All Isn't Just a 'Women's Issue'
Yes, Caregiving Is Essential Infrastructure
Unforgettable Signs From the Protests
23 Ways Women Still Aren't Equal to Men
Ma’Khia Bryant: What We Know
Greta Thunberg Expertly Trolled Boris Johnson
The Hope and Heartbreak of Derek Chauvin's Verdict