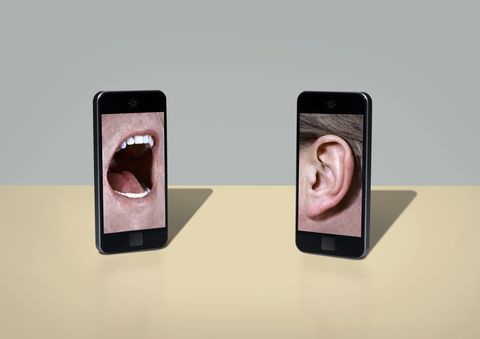 Mass shootings are so commonplace in America that public reaction follows a predictable formula: "thoughts and prayers" to the victims, reminders of our nation's abysmal gun laws from the left, ire at those believed to be "politicizing" gun violence from the right.

This week, after a shooting in Virginia left four people wounded, including House majority whip Representative Steve Scalise, that formula took a bit of a turn. Republicans, who seem to have been specifically targeted by the shooter, have called on the left to tone down their anti-Trump rhetoric, claiming it stoked Wednesday's violence.

For years, conservative lawmakers and pundits have turned a blind eye to the incendiary language used on the right and ignored related violence.

It's true that there's been a shocking increase of disturbing language in politics that needs to end. But while those on both sides of the aisle rightly condemn this week's heinous attack, we should criticize all rhetoric that contributes to real life violence—and be consistent in those denunciations.

For years, conservative lawmakers and pundits have turned a blind eye to the incendiary language used on the right and ignored related violence. When a shooter killed three people and wounded nine others at a Colorado Planned Parenthood in 2015, the attacker parroted the language of anti-choice politicians, yelling about "baby parts." But there was no reflection on how calling abortion providers "murderers" or making fantastical claims about Planned Parenthood's work might incite violence.

This month, two Democratic candidates have dropped out of local races after being inundated with death threats. Michael Treiman, who was running for mayor of Binghamton, New York, had his wife and children threatened over email and was hit with a soda container by a man who yelled "liberal scumbag." Kim Weaver, who was running for the House of Representatives in Iowa, also dropped out because of death threats—threats that her opponent Rep. Steve King claimed were "a fabrication." In response to yesterday's shooting, though, King said that "violence is appearing in the streets, and it's coming from the left." 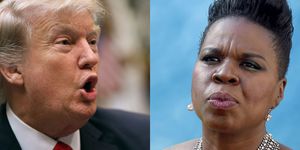 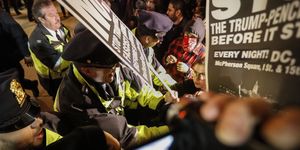 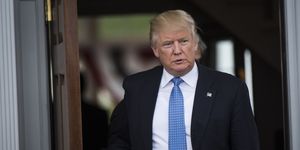 Yesterday Newt Gingrich also said that the shooting was "part of a pattern" of "increasing intensity of hostility on the left." But in 2011, after Arizona Rep. Gabrielle Giffords was shot in the head, Gingrich took issue with liberals' reactions —some of which pointed out the danger of an ad Sarah Palin was running at the time using a crosshairs graphic—saying, "in a country with free speech, people occasionally use strong language."

Donald Trump, Jr. sent out a tweet yesterday connecting the shooting to a performance of Julius Caesar in which the Roman ruler resembles Trump, Sr., yet has aligned himself with white supremacists in his tweets and media appearances. Kathy Griffin was roundly and rightly criticized over a photoshoot she participated in that depicted violence against Trump, but no one seemed bothered when Trump hosted Ted Nugent at the White House—a man investigated by the Secret Service for making threatening remarks directed at President Obama.

And of course, the president himself encouraged violence at his campaign rallies, saying he'd like to "punch" a protester in the face and reminiscing for the good old days when protesters were "carried out on a stretcher." A few months before the election, Trump even suggested that perhaps "the Second Amendment folks" could stop Hillary Clinton.

And so conservative's calls for toning down violent rhetoric fall flat when they've so often eschewed that very advice.

It's a sign of a deep national sickness that Americans have become so accustomed to horrific violence and threats—and that our politicians have done so little to stop it.

Hate crimes are on the rise in the U.S.; a white supremacist killed two people and wounded another who were trying to protect two girls in Portland; racists have left nooses at an elementary school and the National Museum of African American History and Culture, among other places; an anti-Semitic sign was hung over an Oregon highway; and a candidate for Congress in Tennessee ran a billboard to "Make America White Again." In schools, kids are quoting Trump to bully their classmates with racist taunts.

It's a sign of a deep national sickness that Americans have become so accustomed to horrific violence and threats—and that our politicians have done so little to stop it.

So in part, Republicans are right: We should be having a national conversation on the way hateful rhetoric can enable violence. It's way past time. But for that that discussion to be successful, it needs to be honest. I hope people of all political persuasions are up for it.

Jessica Valenti Contributing Editor Jessica Valenti is a columnist and author of five books on feminism, politics, and culture.
This content is created and maintained by a third party, and imported onto this page to help users provide their email addresses. You may be able to find more information about this and similar content at piano.io
Advertisement - Continue Reading Below
More From Politics
How to Demand Justice for Adam Toledo
Daunte Wright's Death Sparks Protest in Minnesota
Advertisement - Continue Reading Below
41 Surprising Rules First Ladies Have to Follow
Asian American Women on Where to Go From Here
Syrian Journalists Reflect on a Decade of War
How to Show Your Support for the AAPI Community
Activist Lydia X. Z. Brown on Disability Justice
Elisa Crespo: "I'm Not Here to Make History"
What We Know About the Georgia Spa Shootings
Dianne Morales Has Never Listened to the Naysayers