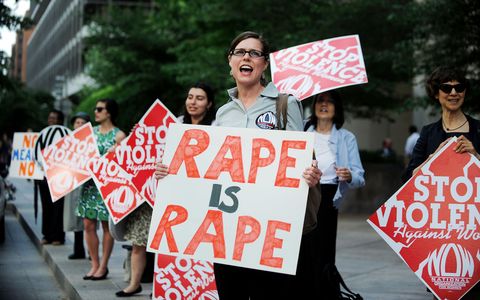 According to one study of male students at the University of North Dakota, 1 in 3 men would rape a woman if they could get away with it.

Researchers evaluated data gathered from 73 men and found that a third said they would force a woman into sexual intercourse if they wouldn't get caught and there wouldn't be any consequences. Those numbers dropped when researchers explicitly used the word "rape," but even then, 13 percent of participants said they would rape if they could.

The researchers conclude that men who say they would force sexual intercourse but not rape (despite the two being one and the same) may "not perceive his actions as rape and may even view the forced intercourse as an achievement." The study also looked at the men's attitudes toward women, showing that men who are more hostile toward women and have more "callous sexual attitudes" are more likely to say outright that they could commit rape. But those who say they would use force but don't use the R-word are notably less hostile toward women, leading the researchers to suggest that "there might be different types of offenders with potential differences in underlying motivation, cognition, and/or personality traits." The fact that many would-be rapists don't see their hypothetical actions as "rape-rape" suggests that there's something very wrong with the way we as a society talk about male sexuality, but also that prevention and education programs may be successful if they target the men who see forcible sex as acceptable but don't associate it with rape.

It's those kind of preventative efforts that anti-rape activists have been pushing on college campuses and in high schools. For too long, many activists say, rape prevention efforts have focused on women, giving them a long list of "don'ts": Don't walk alone at night, don't leave your drink unattended, don't dress too provocatively, don't drink too much. Instead, activists say, the solution is to work with men to stop sexual violence, and to broadly combat "rape culture," a general view that masculinity means being hyper-sexual, aggressive and misogynist; that women have a responsibility to prevent rape and are somewhat responsible for it if they don't; and that sex is something men try to "get" from women through any means necessary. This study, researchers say, points to the conclusion that the efforts led by anti-rape activists may be promising, at least with some men.

Politician Says Woman Is "Too Ugly" to Be a Rape Victim