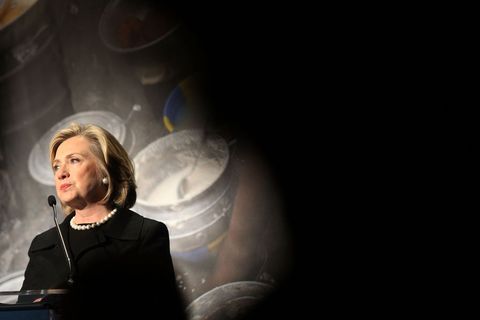 Having a Madam President in the White House is something many women, ourselves included, feel passionately about. But according to a new survey by the Pew Research Center, it's not a priority for all—and the concern is divided along party lines.

The research says that 73% of Americans expect to see a female president within their lifetimes, but expecting one is different from wanting one, especially among men. Only 46% of male Democrats said they thought having a female president was "personally important" to them, and a paltry 16% of GOP men felt the same. Womp.

Women, thankfully, were a little more hopeful for a female commander-in-chief. More than two-thirds of Democratic women say they'd like to see a female president in their lifetime, compared to only 20% of Republican women who want the same thing.

The good (well, and bad) news is that most Americans are well aware of the obstacles women have to face on the path to political power. Nearly half of female respondents said women have trouble in politics because they're held to tougher standards than men, even though a third of all respondents said they think women are more ethical and better at compromising.

Another depressing note: Men have a lot of catching up to do when it comes to their perceptions of gender privilege. Less than half of men surveyed said women face some discrimination in society. Yikes.

The Unexpected Lessons I Learned Working in Politics

Women Are Outpacing Men in Intelligence