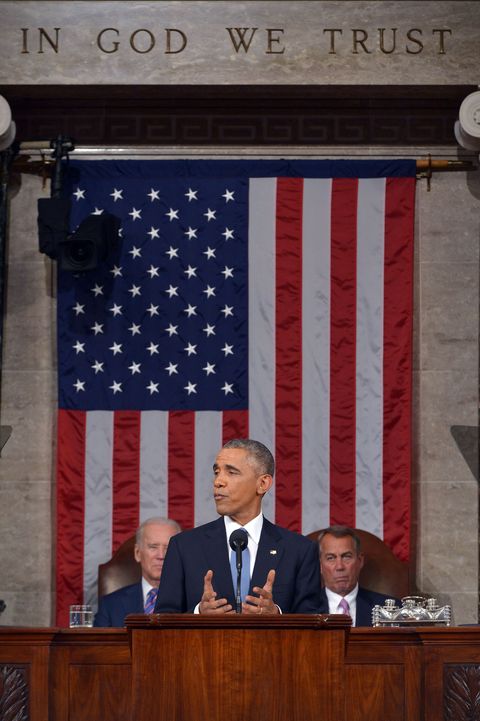 Every year, we watch the State of the Union at a crowded bar or at home following along on the Twitterverse. This year, we did the exact same thing. Except we also played bingo.

The American Association of University Women—a non-profit focusing on women's equality–created three bingo cards especially for the #SOTU, with terms and buzzwords they thought we would hear from President, like "equal pay," "campus sexual assault," "STEM," and "she."

We were so ready to check off all those boxes—but we never had the chance. Other than calling for guaranteed paid sick leave and delivering a nice zinger about equal pay (without actually calling on Congress to pass the Paycheck Fairness Act), the President failed to mention many of the issues that featured on the AAUW cards—things that matter to women. Like the fact that reproductive rights are still being eroded on a state-by-state basis or that 2014 saw an unprecedented rise in awareness around the epidemic of sexual assault on college campuses.

Still, in his final State of the Union, Obama made many galvanizing points. He focused on "middle class economics" and working families and highlighted the need for affordable, high-quality childcare and free community college tuition. He emphasized the threat of climate change, urging countries around the world to follow the lead of the U.S. and China, who struck a historic deal to cut carbon emissions last year, the warmest on record. It was also a historic speech, marking the first time a president has used the words "transgender" and "bisexual" in a State of the Union address.

But after such a pivotal year for feminists—with Malala Yousafzai winning the Nobel Peace Prize, Laverne Cox and trans rights covering Time magazine, and the awareness raised by #YesAllWomen—we were let down. We hate to think it will take a female President for women's issues to come to the political fore...but we're so ready when they do.

Rebranding Feminism: We Are the XX

Kayla Webley Adler Deputy Editor Kayla Webley Adler is the Deputy Editor of ELLE magazine.
This content is created and maintained by a third party, and imported onto this page to help users provide their email addresses. You may be able to find more information about this and similar content at piano.io
Advertisement - Continue Reading Below
More From Politics
Kristin Urquiza Wants Justice for COVID-19 Victims
A Breakdown of VP Harris's Net Worth
Advertisement - Continue Reading Below
WH Announces Removal of the Hyde Amendment
What Liberation Means This Juneteenth
Kathryn Garcia: It's Time to Step Up or Shut Up
A Valedictorian Speaks Out Against Abortion Bans
Standing Between Care and Violence
Seeking Healing a Century After the Tulsa Massacre
What to Know about Texas's Abortion "Trigger Ban"
A New Book Invites Us to Rethink Menstrual Equity