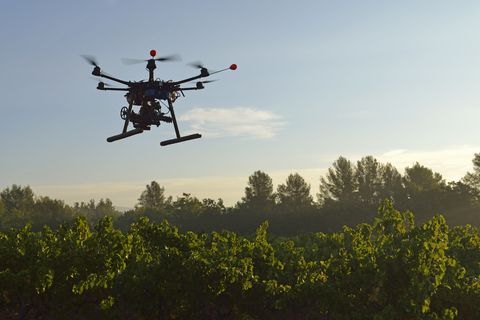 Drones have been used for war, for photography, and even for Amazon deliveries. But now, drones are entering the fight for reproductive rights.

Time reports that women's rights groups are set to use drones to deliver abortion pills from Germany to Poland, where women are prohibited from ending a pregnancy unless there's proof of rape or incest, or the mother or fetus's life is endangered in some way. Even then, it's still very tough to get an abortion.

The activists don't need permission from either country's government because the drone weighs less than 5 kg (11 lbs), isn't used for commercial purposes, and isn't flying in controlled airspace. And the women won't get in trouble either, because under Polish law they can't be prosecuted for illegal abortions.

The drugs—mifepristone, and misoprostol—are approved by the World Health Organization, which found that women can take them at home without doctor supervision. The first drone will carry packages to Slubice, a town on the Germany-Poland border, on June 27.

An estimated 50,00 underground abortions occur in Poland every year, the Telegraph reports, and many Polish women fly to countries like the U.K. for procedures. "We can't stop pointing out the lack of safe access to abortion and medical abortion pills," Rebecca Gomperts, head of the Dutch group Women on Waves, told the newspaper. "It's a violation of women's rights. We have to make every effort to make sure they get that access."