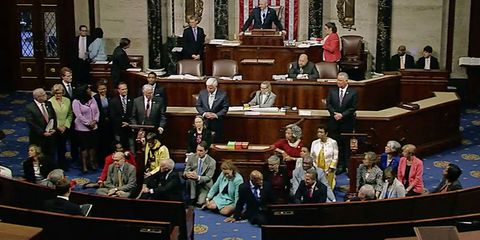 House Democrats have staged a sit-down protest on the House floor, seeking a vote on gun control measures following the Orlando nightclub shooting.

A group of about 30 Democrats led by Georgia Rep. John Lewis demanded a vote on measures to expand background checks and block gun purchases by some suspected terrorists, before sitting down and "occupying" the House floor.

The group demanded that House Speaker Paul Ryan keep the House in session through its planned weeklong recess next week to debate and vote on gun legislation.

Rep. John Larson of Connecticut said lawmakers were "calling for the simple dignity of a vote."

"Our country cannot afford to stand by while this Congress continues to be paralyzed by politics," he added.

"Rise up Democrats, rise up Americans," Larson said. "We will occupy this chamber."