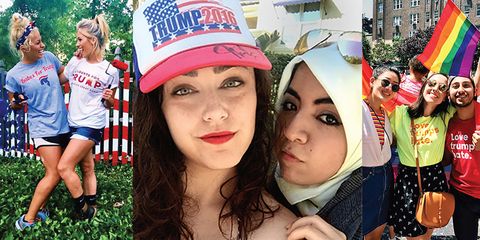 Courtesy of the subjects

It's been nearly 100 years since women won the right to vote, and clearly, we don't take the privilege lightly. In every presidential election since 1964, more women than men have cast ballots.

Over the past year, we've watched the conventions, rallies, and debates. We've heard the opinions of pundits, party leaders, and family and friends. Now we're hearing yours—whatever candidate you support—in this snapshot of voters across America.

Voting History: Voted for Mitt Romney in 2012, and supported John Kasich in the primary.

"Donald Trump is a divisive character and not someone who embraces America. At our roots, we are a country of immigrants, and his comments about excluding anyone from overseas are very offensive...I wish my vote was for someone whom I agreed with more and was inspired by instead of just being the lesser of two evils; my vote is more anti-Trump than pro-Hillary."

Voting History: First presidential election; she started paying attention in 2008 because she was excited by Barack Obama's candidacy.

"I'm just hopping off the Bernie [Sanders] wagon, so I'm trying to adjust. Have you seen those memes that are like, 'I'm With Her...I Guess?' That's essentially how I feel."

"People ask how I could support a 'racist' against my own people [Cepeda is of Mexican descent] ... Donald Trump is the only candidate pointing to the statistics of the unreported violence that's bleeding over into the U.S. as illegal immigration and drug cartel violence continues ... To move forward as a nation, we must secure our border for our safety and our future."

Hall is a member of the Harvard Republican Club, which is not endorsing the Republican nominee for president for the first time since its founding in 1888

Voting History: Voted for Marco Rubio in the primary.

"I cannot put my support behind someone whom I so fundamentally disagree with. I highly doubt Gary Johnson is going to win, but I can't not vote. Women only got the right to vote, what, 100 years ago? I'm not about to waste that right."

Hagmayer is on the right

Voting History: Too young to vote in previous elections, but supported Mitt Romney and John McCain. Growing up, "Fox was always on" at her house.

"The main reason I'm voting for him is because he has brought so much spirit back to our country. I've been to two rallies and talked to people decked out in patriotic gear—they are so ready for the change Trump will bring and are ready to be proud Americans again."

Voting History: First election—she was born in Sudan and became a U.S. citizen this year.

"If we are to survive climate change, we have to have collective action, and the government is paralyzed. We need to actually change things ... and Jill Stein is a real progressive candidate who is for the people and can be held accountable."

Rowlands is on the left

"My mother is from Mexico and my father is from Wales, so I'm the child of immigrants ... The issue I'm most passionate about [with] Trump is the way he's tough on immigration. We don't have a country if we don't have borders, and I think we need to put America first ... My mother and I are very much for the border wall."

Qian is in the center

"Say whatever you want about Hillary Clinton—you can disagree with her, you can love her—but at the end of the day, she is a woman, and that in and of itself is really significant ... She listens and tries, and really wants to help the largest number of people that she can. I think she has been handling herself with grace despite the mud that is thrown at her."

A version of this article appears in the November issue of Marie Claire, on newsstands now. Reporting by Paulina Cachero, Bridget Dufour, Hannah Dylan Pasternak, and Eliza Solomon. All photos courtesy of the subject.