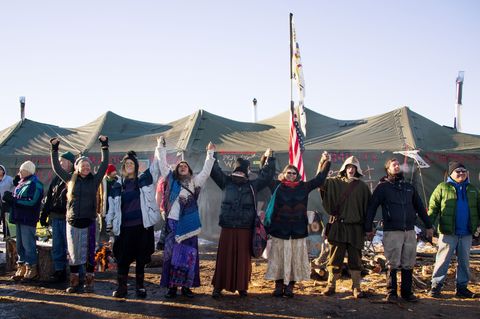 After weeks of protests, news is breaking that construction of the Dakota Access Pipeline will stop. CNN reports that the U.S. Army Corp of Engineers won't approve an easement allowing the pipeline to go under Lake Oahe in North Dakota.

Jo-Ellen Darcy, the Army's assistant secretary for civil works, said in a press release that the decision was based on the need to explore alternate routes.

"Although we have had continuing discussion and exchanges of new information with the Standing Rock Sioux and Dakota Access, it's clear that there's more work to do," Darcy said. "The best way to complete that work responsibly and expeditiously is to explore alternate routes for the pipeline crossing."

Any alternate route would be chosen with full consideration of its environmental impact and would involve public input and analysis, Darcy said.

The Standing Rock Sioux tribe released a statement exploring their gratitude to the Obama Administration for its support.

Standing Rock Chairman Archambault spoke to reporters about the issue, saying, "I would say that it's over."

Kayleigh Roberts Kayleigh Roberts is the weekend editor at Marie Claire, covering celebrity and entertainment news, from actual royals like Kate Middleton and Meghan Markle to Hollywood royalty, like Katie Holmes and Chrissy Teigen.
This content is created and maintained by a third party, and imported onto this page to help users provide their email addresses. You may be able to find more information about this and similar content at piano.io
Advertisement - Continue Reading Below
More From Politics
How to Help Black Lives Matter If You Can't Donate
Does Your State Have a Tampon Tax?
Advertisement - Continue Reading Below
What's Ranked-Choice Voting? Allow Us to Explain
Paid Leave for All Isn't Just a 'Women's Issue'
Yes, Caregiving Is Essential Infrastructure
Unforgettable Signs From the Protests
23 Ways Women Still Aren't Equal to Men
Ma’Khia Bryant: What We Know
Greta Thunberg Expertly Trolled Boris Johnson
The Hope and Heartbreak of Derek Chauvin's Verdict