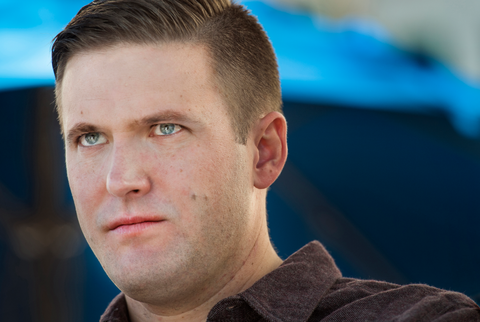 On Tuesday night, around 400 people gathered at Texas A&M University to hear the speech of Richard Spencer, the leader of the white nationalist think tank National Policy Institute. Spencer, who is a prominent figure in the white supremacist "alt-right" movement, began his speech by celebrating Donald Trump's electoral win as a victory for the white nationalist movement.

"Whether its nice to say that or not, we won, and we got to define what America means. We got to define what this continent means. America at the end of the day belongs to white men," Spencer said. "Once Europeans stop farting around with all this equality and democracy nonsense, I think we will go to the stars, I think we will rival the ancients as far of our greatness."

One of the speech attendees was Jeff Paul, a reporter for KTVT and CBS, who posted a disturbing photo on his Twitter account that showed one of the usernames that popped up when he tried to connect to wifi inside the room.

Found this when I went to connect to a wifi connection inside room for Alt Right speaker Richard Spencer at Texas A&M @CBSDFW pic.twitter.com/daV8oJhtJW

Spencer's controversial appearance was met with hundreds of protesters from the student body.

Several people inside the room dressed as clowns and held up signs that read, "He's the real Bozo."

One held up a sign with an image of a gun pointed toward Adolf Hitler's face and the words "Follow Your Leader."

Some students raised fists when he took questions.

Others stood in line to pose questions about his thoughts on the Hitler salute and what he plans on doing with all of the people of color in America.

You can watch Richard Spencer's speech below: